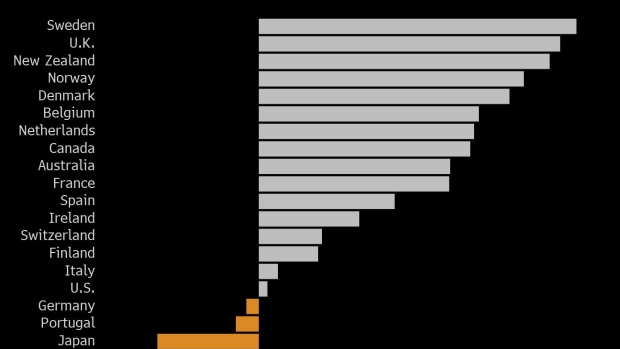 A surge in inflation is prompting central bankers around the world to adjust or review their monetary policy strategies.

In the U.S., Federal Reserve officials are now split on whether to raise their benchmark interest rate by the end of 2022. The Bank of England edged closer to such a move as soon as November. Norway’s Norges Bank boosted its main rate while further price increases in Mexico make it difficult for Banxico to pause its tightening.

The Fed’s so-called dot plot, which the U.S. central bank uses to signal its outlook for the path of interest rates, shows officials are now evenly split on whether or not it will be appropriate to begin raising the fed funds rate as soon as next year. The median projection indicated no rate increases until 2023, after Fed officials concluded a two-day meeting this week.

The so-called dwell time for containers at 11 major railroad depots reached an average of 9.8 days this month, according to a tally of its own boxes maintained by Hapag-Lloyd AG, the world’s fifth-largest container carrier. That’s up from 6.7 days in May and 5.9 in February.

Business activity in the euro area lost momentum in September after demand peaked over the summer and supply chain bottlenecks hurt both services and manufacturers. An IHS Markit gauge of purchasing managers dropped to a five-month low, while a measure of input costs surged to a 21-year high.

The Bank of England raised the prospect of hiking interest rates as soon as November to contain a surge in inflation, which it now expects will exceed 4% following a spike in energy prices. The central bank agreed that any future tightening should start with an increase, even if that “became appropriate” before its bond-buying program finishes around the end of the year. The BOE’s new focus is enabled by stronger-than-expected jobs data.

China Evergrande Group, until recently the world’s largest property developer, owns dozens of stalled sites like Sunny Peninsula across China. Buckling under more than $300 billion in liabilities, the company is close to collapse, leaving 1.5 million buyers waiting for finished homes. Its troubles are partly a familiar tale of an overextended, systemically important company taxing its creditors’ patience. The situation also reflects deliberate policy choices made by the ruling Communist Party.

China’s central bank net-injected the most short-term liquidity in eight months into the financial system, with markets roiled by concerns over Evergrande’s debt crisis.

Mexico’s annual inflation accelerated in early September, putting pressure on a central bank that may be looking for a pause after two consecutive interest rate hikes. Consumer prices rose 5.87% compared to a year earlier.

Soaring property prices are forcing people all over the world to abandon all hope of owning a home, a phenomenon given wings by the pandemic. The upshot is the perennial issue of housing costs has become one of acute housing inequality, and an entire generation is at risk of being left behind.

The forces driving the global purge of working women are strikingly similar country to country: School shutdowns, day-care center closures, remote schooling and the ensuing juggle between employment and caregiving forced some parents to cut their hours or leave their jobs altogether. Factor in the reality that women were also more likely to work in industries hit harder by the pandemic, and the result is a once-in-a-century crisis.