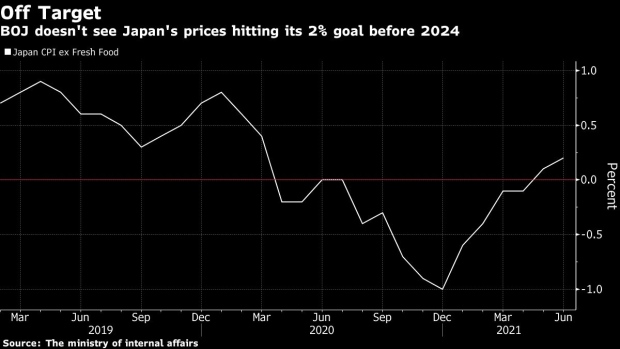 In Europe, fresh data show companies are passing along higher costs to consumers. Activity at U.S. service providers has come off the boil as firms struggle to fill open positions and ensure enough goods are in stock.

Some central banks in emerging markets, such as Mexico, are boosting interest rates in the face of higher inflation. Housing prices are also picking up in many advanced economies.

House prices in the richest nations may be overvalued by about 10% after a decade-long boom that’s one of the strongest since 1900. British research firm Oxford Economics identified the Netherlands, Canada, Sweden, Germany and France as the most risky property markets, basing its findings on long-term trends and price-to-rent ratios.

A measure of activity at service providers settled back in July to a five-month low, reflecting businesses’ persistent struggle to fill positions and stock shelves. At the same time, the IHS Markit U.S. manufacturing purchasing managers’ index advanced to a fresh record.

The number of container ships waiting to enter the largest gateway for U.S. trade with Asia increased to a 3 1/2-month high, adding delays for companies trying to restock inventories on expectations for a solid economy in the second half of the year.

Companies across Europe are stepping up price hikes to cope with mounting cost pressures, supply-chain disruption and delivery delays. A survey from IHS Markit showed manufacturers’ costs surged in July at the fastest pace since at least 1997, while selling prices also jumped.

Scorching heat is boosting electricity prices across Europe, adding to a long list of factors that have sent power costs surging this summer. Extreme temperatures are boosting demand for cooling at a time consumption was already rising as the world emerges from the global pandemic.

While Japan’s key consumer prices inched up in June for a second month with the help of higher energy costs, the pace of gains still remains far from the levels fueling inflation fears elsewhere in the world.

The devastating floods in the Chinese city of Zhengzhou is raising concerns about a potential spike in inflation. While there may be some upward pressure, any impact would be mild and unlikely to last beyond near term, write Bloomberg Economics’ Eric Zhu and Chang Shu.

South Africa’s central bank softened its stance on raising borrowing costs this year as the country reels from deadly riots and a third wave of coronavirus infections.