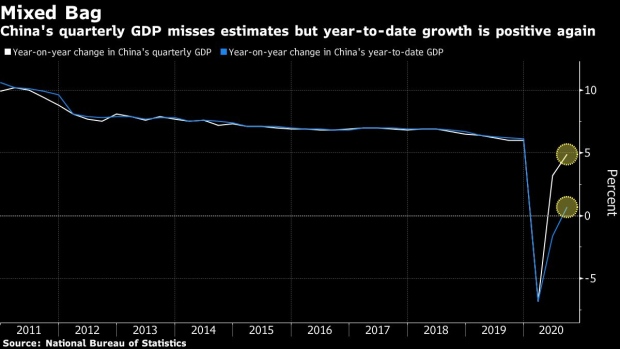 (Bloomberg) -- Anxiety is building about job security in a world upended by the coronavirus pandemic.

While the global health crisis is spurring expectations for more monetary stimulus in Europe and creating a larger hole in the U.K. budget, China’s recovery is progressing and the U.S. is making headway with the help of a housing boom.

More than half of workers around the world are worried about losing their jobs, according to a survey measuring labor-market insecurity wreaked by the coronavirus crisis.

After rapid acceleration in the 1950s and 1960s, productivity has slowed and while Covid-19 is reshaping economies now, technological change will determine the path of growth in the coming decades. In Bloomberg Economics’ baseline case, global productivity is forecast to grow by about 0.8% a year between 2020 and 2030 -- a slight acceleration compared with the last decade.

Sales of previously owned homes rose in September to the highest level in 14 years as a desire for more space and record-low mortgage rates continued to support demand. The figures, which included record selling prices and leaner inventory, reinforce other data showing a booming housing market that’s a key source of fuel for the economy.

The number of Americans filing for state jobless benefits declined for the third time in four weeks, indicating gradual improvement in the labor market as the economy rebounds.

Surging coronavirus infections and renewed lockdowns will prompt the European Central Bank to step up monetary stimulus later this year, according to economists surveyed by Bloomberg.

The U.K.’s budget deficit widened in September, highlighting the cost of supporting the economy through the Covid-19 pandemic.

Germans’ demand for toilet paper is once again on the rise as coronavirus cases reached new records: sales were 90% higher last week than pre-pandemic averages.

China’s recovery from the coronavirus slump continued in the third quarter and showed signs of broadening in September, keeping the economy on track to be the world’s only major growth engine and validating Beijing’s aggressive approach to controlling the pandemic.

The Bank of Japan is likely to consider changing its inflation forecasts to reflect the short-term impact on prices of a government travel campaign at its policy meeting next week, according to people familiar with the matter.

Rising food costs are hitting emerging markets with a double whammy: driving millions into hunger, and thwarting central banks as they try to end the worst slump in decades.

Turkey raised the upper bound of its interest-rate corridor but unexpectedly left its benchmark on hold, risking further volatility in the lira as the central bank sticks with its stealth tightening to contain the currency’s weakness.

Russia’s central bank kept interest rates on hold for a second straight month, but left open the possibility of future cuts as an economic recovery falters.