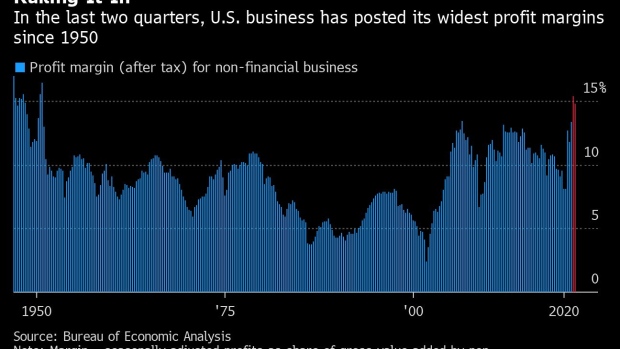 An employee operates a forklift inside the Home Depot flatbed distribution center in Stonecrest, Georgia, U.S., on Tuesday, Nov. 30, 2021. The facility is the centerpiece of Home Depot's plan to ease the complexity of direct-to-consumer sales - and win market share from both its main rival, Lowe’s Cos., and independent distributors. Photographer: Elijah Nouvelage/Bloomberg , Bloomberg

Unemployment rates in the U.S. and Germany fell while price pressures continued to mount across the globe, developments that are prompting many central banks to raise or consider boosting borrowing costs.

Euro-area inflation surged to a record last month, while price increases in Korea rose at the fastest pace in a decade. Russia’s central bank will consider a big increase in its key rate at its next meeting. In Brazil, officials have delivered the world’s biggest tightening cycle to rein in inflation, though growth risks are emerging.

The unemployment rate fell in November by more than forecast to 4.2% even as job growth registered its smallest gain this year, offering a mixed picture that may nevertheless push the Federal Reserve to quicken the wind-down of pandemic stimulus. The divergence is because the Bureau of Labor Statistics’ monthly report is composed of two surveys -- one of households and the other of employers -- which each have slightly different questions and definitions of employment.

In the past two quarters, U.S. corporations outside of the finance industry posted their fattest margins since 1950 -- one reason why stock markets keep hitting all-time highs. The data suggest business can comfortably pass on all its higher costs, which means there may be more inflationary pressure to come.

Austin is at the center of America’s great migration, with transplants flooding the market for high-paying jobs, an easygoing lifestyle and housing that until recent years was cheaper than most coastal cities. That’s sparking the biggest homebuilding boom in Texas history — but the wheels of production are grinding to a halt as supply shortages, inflation and a tight labor market converge.

Euro-area inflation surged to a record for the era of the single currency and exceeded all forecasts, adding to the European Central Bank’s challenge before a crucial meeting next month on the future of monetary stimulus. Consumer prices rose an annual 4.9% in November, topping all projections. A measure that strips out volatile components such as food and energy also reached a record.

German unemployment extended its decline in November as businesses added staff to work off a backlog in orders. Unemployment in Europe’s largest economy fell by 34,000, beating economists’ forecast for a 25,000 drop. That pushed the jobless rate to 5.3%.

The Bank of Korea said it expects inflation this year to come in above its upward revision of just a week ago as consumer price gains exceeded all estimates in November, accelerating to the fastest pace since 2011.

Brazil economists forecast for the first time that inflation will end next year at the upper limit of the tolerance range, likely boosting pressure on the central bank as it delivers aggressive interest rate hikes. Consumer prices will end 2022 at 5%, according to a central bank survey. Analysts also cut their economic growth estimate for next year to 0.58% from 0.70%.

The Bank of Russia will consider an increase in its key rate of as much as 100 basis points at its next meeting on Dec. 17 as inflation continues to run at double its target, Governor Elvira Nabiullina said.