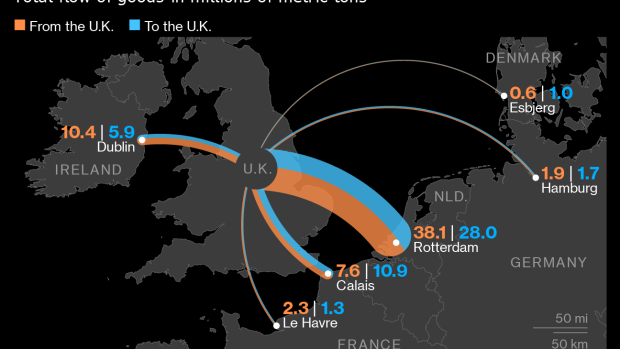 Uncut artificial Christmas tree branches sit on the ground on the production line at the Bosen Gongyi Co. factory in Yiwu, Zhejiang province, China, on Thursday, Oct. 25, 2018. U.S. President Donald Trump's trade war was supposed to be the Grinch to steal the Christmas cheer from this holiday-exporting hub about 175 miles southwest of Shanghai. But, so far at least, it looks as if the enduring power of globalization—and entrenched supply chains—is winning out. Photographer: Qilai Shen/Bloomberg , Bloomberg

(Bloomberg) -- The slow grind to more moderate growth continues in China, Germany’s government is more downbeat about next year’s prospects and the American consumer remains king of an economy that received another piece of bad news this week on the manufacturing front.

With a decline in exports to the U.S. expected to continue as long as tariffs remain, China’s economy is likely to keep struggling as falling factory prices hit company profits and rising consumer inflation pinches spending power.

A chill has come over China’s hot-rolled steel market. The spot price of hot-rolled sheet, a benchmark product used to produce vehicles and appliances, fell to the lowest level since November and is denting profitability at mills.

An unexpected dip in September retail sales notwithstanding, the tightening in the U.S. labor market is generating faster wage growth, particularly among those in their prime working years, with minorities enjoying the largest year-over-year pay improvements. That should provide plenty of fuel for consumer spending.

While consumers remain the economy’s bright spot, the news for manufacturers continues to dim. Against a backdrop of weaker global demand, cutbacks in domestic investment and trade policy challenges, a union strike at General Motors Co. caused factory output to skid 0.5% in September.

German Chancellor Angela Merkel’s government cut its 2020 growth forecast to 1% from 1.5%. Europe’s biggest economy expects the pinch from waning global demand, Brexit and lingering trade disputes to carry over into next year.

From Roscoff in France to Esbjerg in Denmark, as well as across the Irish Sea in Dublin, ports have spent millions of euros to prepare for any upheaval from Britain’s tortuous journey out of the European Union.

While concern over a global economic slowdown crushes property prices from London to New York, the eastern European market is proving to be an oasis of growth.

To contact the reporter on this story: Vince Golle in Washington at vgolle@bloomberg.net

To contact the editors responsible for this story: Scott Lanman at slanman@bloomberg.net, Sophie Caronello