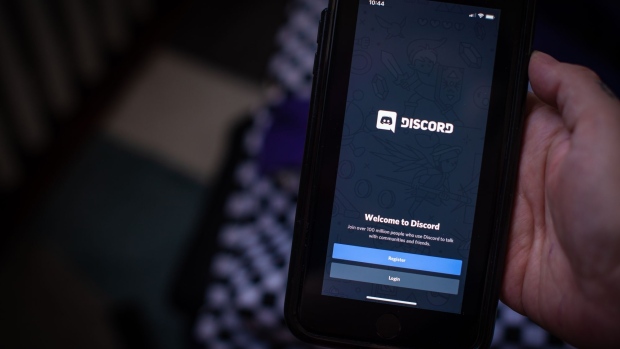 The Discord Inc. application on a smartphone arranged in Hastings-on-Hudson, New York, on Tuesday, March 23, 2021. Microsoft Corp. is in talks to acquire Discord Inc., a video-game chat community, for more than $10 billion, according to people familiar with the matter. Photographer: Tiffany Hagler-Geard/Bloomberg , Bloomberg

(Bloomberg) -- Discord Inc. raised $500 million in a new round of financing, according to a spokesperson for the popular digital chat company.

The deal values Discord at about $15 billion, according to a person familiar with the matter who asked not to be identified discussing private information. That’s more than double the $7 billion price tag investors gave the company during a funding round last year.

San Francisco-based Discord is especially popular with video gamers, but has expanded to everything from study groups to art communities. It now has more than 150 million monthly active users, who use the service to communicate via voice, video and text.

In an emailed statement, Jason Citron, Discord co-founder and chief executive officer, said that the new capital will be used “to invest in new features and tools” and expand the company’s workforce.

Bloomberg had earlier reported that Dragoneer was in talks to lead this new investment.

Earlier this year, several companies approached Discord about an acquisition. The company was in talks with Microsoft Corp., which bid $12 billion for the startup, people familiar with he matter said at the time. But the discussions ended with Discord rejecting the offer this spring.

Some of Discord’s existing investors include Benchmark, Greylock Partners, Index Ventures and Spark Capital. Prior to this round of financing, the company had already raised almost $600 million to date, according to data provider PitchBook.