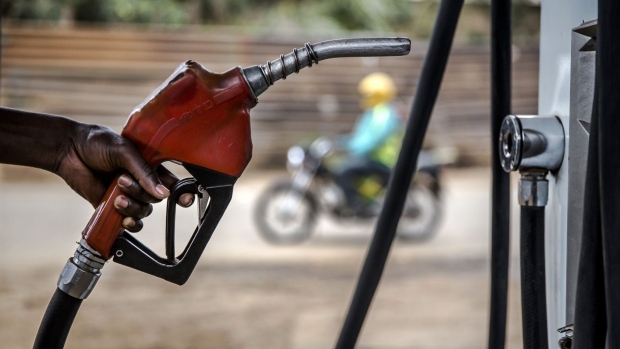 An attendant holds a fuel pump at a small roadside petrol station in the Huruma suburb of Nairobi, Kenya, on Wednesday, March 28, 2018. An impending 16 percent value-added tax on gasoline in Kenya will be passed on to consumers and increase inflation, practitioners told Bloomberg Tax. , Bloomberg

(Bloomberg) -- Transportation fares in Africa’s largest economy are surging even as the country spends billions of dollars subsidizing gasoline to curb prices and temper public discontent over the high cost of living.

The average cost of an intra-city bus journey increased 46% to 582 naira ($1.39) a trip in May compared with a year earlier and flight tickets soared 53% over the same period to 55,907 naira, according to data released on the National Bureau of Statistics’s website.

Prices have jumped despite Africa’s biggest crude producer spending 1.49 trillion naira subsidizing gasoline in the first four months of this year to keep pump prices at 162 to 165 naira a liter, which is among the lowest in the world. It has allocated 4 trillion naira for the intervention in 2022.

Oil prices have climbed by a fifth since Russia invaded Ukraine in late February. Nigeria has been unable to benefit due to its own sluggish output, which has declined in every month of this year, according to government data.

The surge in transportation prices that are fanning inflation -- already at almost 18% -- is likely to be a campaign issue ahead of presidential elections in February. Both major party candidates have promised to fix the economic situation of rampant unemployment, sluggish growth and high poverty rates.

Nigerians spend about 57% of their income buying food and almost a 10th on transport, according to the statistics agency.