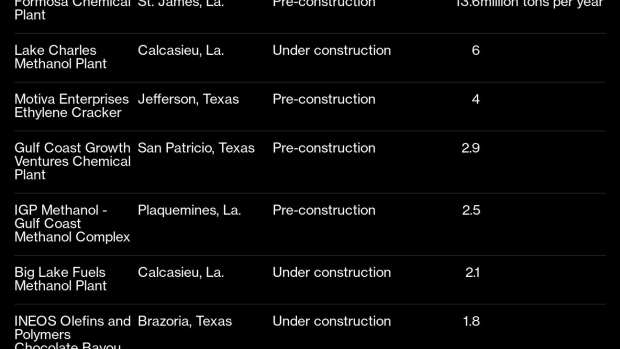 (Bloomberg) -- Access to cheap natural gas has helped displace coal and cut greenhouse gas emissions. But it’s also incentivized a massive buildout of fossil-fuel infrastructure along the U.S. Gulf Coast that one study says could increase carbon emissions by half a billion metric tons a year.

A long list of petrochemical plants, liquefied natural gas terminals and other facilities have been proposed or permitted on the Texas and Louisiana coasts as companies including Exxon Mobil Corp., Phillips 66 and Qatar Petroleum seek to tap cheap shale gas from nearby oilfields. If all of them are built, they could add more than 500 million tons of carbon emissions annually by 2030, according to a study published in Environmental Research Letters. That’s equal to about 10% of current U.S. emissions, or 131 power plants burning coal.

Natural gas is frequently lauded as a “bridge fuel” -- a substitute for coal and other dirtier energy providers until cheap energy storage makes solar and wind power as flexible a source of energy as fossil fuels. But many environmentalists and some policymakers argue that building costly new infrastructure further commits the U.S. to fossil-fuel dependence at a time when climate change requires a dramatic move toward lower-carbon energy sources.

While past studies have estimated emissions that occur during oil and gas production, there’s less research on emissions from midstream activities -- like shipping hydrocarbons on pipelines -- or downstream ones -- such as turning natural gas fractions into plastics. The new study from the University of Texas at Austin finds that as much as 70% of all emissions from oil and gas buildout could come from midstream and downstream emissions.

“The big insight here is that the change in the price of natural gas changes the incentives to invest in some types of downstream infrastructure,” Andrew Waxman, assistant professor at the University of Texas at Austin and lead author of the latest study, said in an interview. “Having taken apart the IPCC model, [petrochemical buildout] is not explicitly built into their modeling,” he said, referring to the United Nations’ Intergovernmental Panel on Climate Change.

Waxman’s study, which has funding from a foundation named after fracking pioneer George Mitchell, is looking to add granularity to the global forecasting of carbon emissions. His research takes a “bottom-up” approach, analyzing emissions at the project-level and aggregating, versus higher-level, “top-down” estimates. Most forecasts of global emissions “don’t model individual facilities,” said Zeke Hausfather, an energy systems analyst and research scientist at the University of California, Berkeley, who wasn’t involved in the study.

There are, of course, limitations to that approach. The study’s estimates include projects that are proposed but may not be built. That’s particularly relevant for liquefied natural gas, or LNG, export facilities, many of which are unlikely to ever get built as their developers struggle to convince overseas buyers to sign long-term contracts required for financing. In his study, Waxman finds LNG terminals to be among the highest emitters, contributing more than 100 million tons of carbon emissions a year, though the vast majority of those would come from projects that are proposed but not yet under construction.

The study also doesn’t include emissions from explosions and other accidents, which occur from time to time in Texas and Louisiana. And the research doesn’t consider emissions arising from how that fuel is ultimately used.

Still, Waxman’s analysis suggests that “even lower-bound estimates of the incremental emissions from the regional buildout are large.” His group now plans to look at potential policy and technical solutions to address the projected emissions from these facilities. “Given the large magnitude of emissions in our report we think this highlights how focusing attention on policy solutions in the Gulf and southwest region could make a big impact in the absence of comprehensive national climate policy,“ he said.

To contact the reporters on this story: Akshat Rathi in London at arathi39@bloomberg.net;Rachel Adams-Heard in Houston at radamsheard@bloomberg.net

To contact the editors responsible for this story: Simon Casey at scasey4@bloomberg.net;Aaron Rutkoff at arutkoff@bloomberg.net