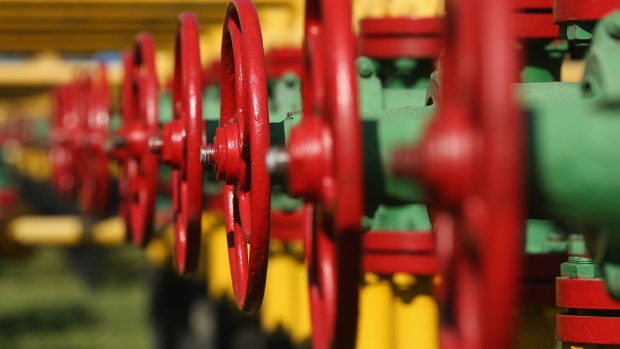 DASHAVA, UKRAINE - SEPTEMBER 18: Hand wheels are seen fixed to valves at the Dashava natural gas facility on September 18, 2014 in Dashava, Ukraine. The Dashava facility, which is both an underground storage site for natural gas and an important transit station along the natural gas pipelines linking Russia, Ukraine and eastern and western Europe, is operated by Ukrtransgaz, a subsidiary of Ukrainian energy company NJSC Naftogaz of Ukraine. Ukraine recently began importing natural gas from Slovakia through Dashava as Ukraine struggles to cope with cuts in gas deliveries by Gazprom of Russia. As Russia has cut supplies many countries in Europe that rely heavily on Russian gas fear that Russia will increasingly use gas delivery cuts as a political weapon to counter European economic sanctions arising from Russian involvement in fighting between pro-Russian separatists and Ukrainian armed forces in eastern Ukraine. (Photo by Sean Gallup/Getty Images) , Getty Images

(Bloomberg) -- Cheaper natural gas prices this year are likely to cement Europe’s shift away from coal as a fuel for producing power.

Abnormally mild winter weather has cut demand for the fuel as a flood of new supplies entered the world’s biggest gas market. That along with higher costs for carbon-emissions allowances has tilted the economics of generating electricity away from coal and toward using more gas.The shift has been welcomed by policy makers led by German Chancellor Angela Merkel’s administration, which is looking at ways to accelerate the closure of its coal industry. Its priority is keeping power flowing while reaching ambitious pollution targets in the Paris Agreement on climate change. A lower cost for gas helps along that process.

“Policy makers in Europe are now happy with such low natural gas prices,” said Ewout Eijkelenboom, senior consultant at the Netherlands-based industry adviser Kyos Energy Consulting. “It makes the coal phase-out easier than expected -- it is almost a natural way of exiting coal.”

Falling gas prices are a global phenomenon. Liquefied natural gas projects are pumping out record numbers of cargoes, cutting wholesale gas costs from the U.S. to Asia. That in turn has helped push down the cost of electricity across Europe, taking some of the heat out of the political debate about energy.

Benchmark gas in Amsterdam plunged to a five-month low last week because of the global glut. Market rates for the coming summer are at the lowest since at least 2007. It’s especially notable that the weakness has arrived during the winter, which is peak-demand season.

Instead, Dutch front-month futures are expected to fall more than 10% to 9.40 euros ($10.42) a megawatt-hour by June before finishing at about 14 euros at the end of the year, according to the median estimate of 10 analysts surveyed by Bloomberg. That’s on par with the average for 2019 and well below last year’s peak of more than 23 euros. Those levels make it more attractive to fire up gas power plants instead of those using coal.

“From April on, we could see the risk of prices really dropping,” said Murray Douglas, a research director for European gas at Wood Mackenzie Ltd. “Coal-to-gas switching will play an even more important role in rebalancing the markets.”

Some respite could come if enough gas plants come online. Since the summer, the Bloomberg German year-ahead spark spread model, which measures the profitability of using gas to generate power, has surpassed the dark spread, the reference for burning coal. The premium is the widest ever, and underlines the growing economic viability of coal-to-gas switching across Europe.There’s already evidence that generators are switching away from coal and toward gas:

Germany’s Economy and Energy Minister Peter Altmaier said last week that gas plants that are now unprofitable to run will grow in importance as the nation phases out both coal and nuclear generation. Meanwhile, demand for power is expected to surge as the government encourages electrification of everything from transport to home heating.

“We’ll need to do something with all that surplus gas,” said Elchin Mammadov, a European utilities analyst at Bloomberg Intelligence. “I’m expecting a further drop in prices and more coal-to-gas switching.”

So far the glut shows little sign of easing. Pipeline supplies are robust, with Russia expected to overcome U.S. sanctions and open the Nord Stream 2 direct link to Europe later this year. Meanwhile, LNG flows are set to grow with new production from projects in the U.S. to Qatar and Australia.

The oversupply has been exacerbated by the weather. This winter is likely to be among the warmest for the past 30 years in Europe. That has cut demand for heating and kept gas stocks unusually high at a time of year when they usually drop rapidly.

“It’s going to be painful,” said Carlos Torres Diaz, head of gas market research at Rystad Energy, a Norwegian research company. At the end of the heating season in March, “we’re going to end up with high storage levels again.”

To contact the authors of this story: Vanessa Dezem in Frankfurt at vdezem@bloomberg.netMathew Carr in London at m.carr@bloomberg.net

To contact the editor responsible for this story: Reed Landberg at landberg@bloomberg.net, Andrew Reierson