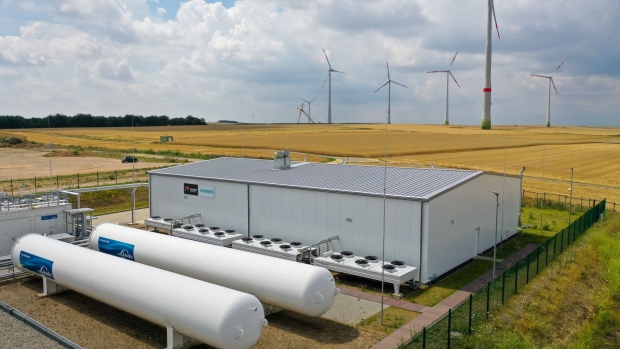 Wind turbines stand in view of the hydrogen electrolysis plant stands at Energiepark Mainz, operated by Linde AG, in Mainz, Germany, on Friday, July 17, 2020. Europe is pinning its green hopes on hydrogen in a plan that sees hundreds of billions of euros in investment flowing into the clean technology and fueling a climate-friendly economic recovery. , Bloomberg

(Bloomberg) -- The falling cost of wind power is shaping up to be a boon for another clean energy source: green hydrogen.

Hydrogen -- a fuel made by electrolyzing water -- requires a tremendous amount of power to produce. But siting hydrogen facilities at wind farms, which typically generate more electricity than they need at night, could give the fuel an edge.

Producing hydrogen at wind sites in the U.S. Midwest and Texas could make it competitive within two years, Morgan Stanley said in a research note Thursday. That would benefit renewable energy suppliers including NextEra Energy Inc. and AES Corp. and hydrogen producers such as Plug Power Inc. It also could cut costs, creating an opportunity for wind-farm developers and companies that seek to generate and use green hydrogen “to form strategic alliances,” analysts led by Stephen Byrd said.

Green hydrogen can be used to fuel everything from cars to power generation plants to industrial facilities. Conventional hydrogen, which is typically used by the refining and chemical industries, is usually made from natural gas and adds to greenhouse-gas emissions.