The pandemic is forcing U.S. officials to yet again tighten their grip on eating out, and that’s cutting into prices for cheese and other dairy products across the U.S. California imposed a curfew across much of the state, closing restaurants to all but take-out orders, and New York City’s Mayor Bill de Blasio has said it’s “just a matter of time” until his state halts indoor dining.

“The second lockdown will have a really bad impact eventually on the price of dairy commodities because the food service demand has been killed partly at least,” Paul Barre, head of dairy at Marex Solutions in London, said in an interview. “In the next weeks the market will start crumbling because there’s just not appetite to purchase -- from the end users -- at the moment.”

Prices for cheese blocks, the type that graces party platters, slipped 13 per cent this year to about US$1.66 a pound, according to Chicago Mercantile Exchange data. Barrel cheese, typically used to make processed cheeses, is down 18 per cent this year.

Barrel cheese could slip to as low as US$1.41 a pound by the end of March, according to HighGround Dairy, a Chicago-based research and brokerage firm partnered with Marex. Cheese blocks futures, which are above US$2 a pound, are expected to sink as low as US$1.49 by that period, the firm said. 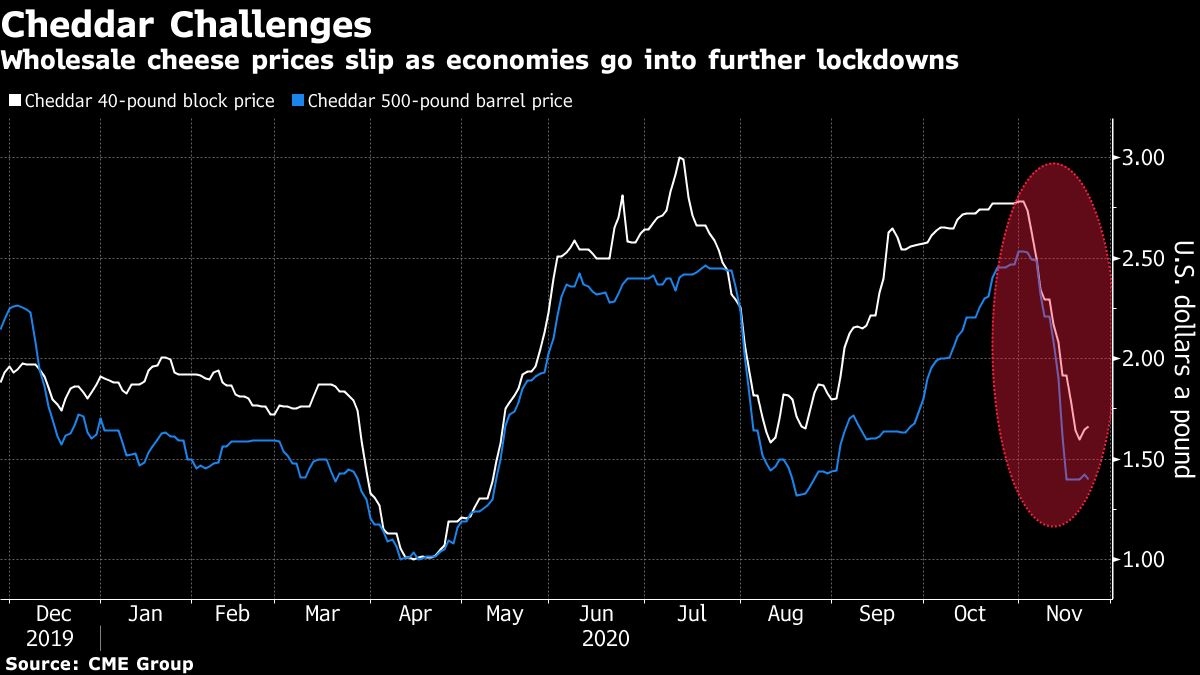 Shutdowns earlier in the year cut demand for dairy purchased by restaurants, schools and other food-service providers, though the sales slumps for wholesale cheeses, butter and milk were offset by increased appetite from grocery stores as consumers shifted to eating at home.

The latest lockdowns threaten to dent prices in a downturn that’s set to deepen as more restaurants and schools close their doors and feed fewer people. Still, fast-food outlets and take-out restaurants may help blunt the impact for dairy producers.

“The American-style cheese and a mozzarella-style cheese -- the traditional cheeses -- are the ones being used on hamburger on sandwiches, on pizzas, and demand for those has been better than anticipated,” Mary Ledman, global dairy strategist at RaboBank in Chicago, said of demand this year. “As long as the drive-thrus remain open, that will be good for cheese demand.”