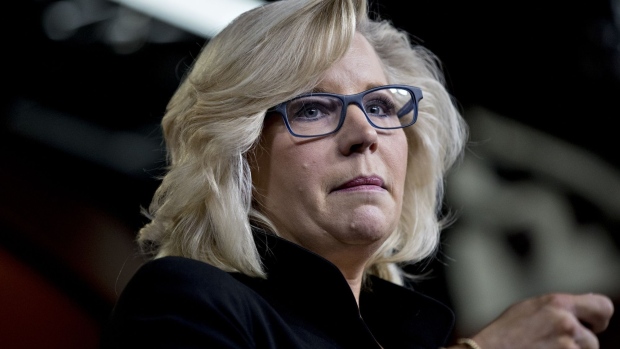 Representative Liz Cheney, a Republican from Wyoming, speaks during a news conference in Washington, D.C., U.S., on Thursday, Feb. 8, 2018. , Bloomberg

(Bloomberg) -- House Republican leader Kevin McCarthy said members of his party are questioning whether Representative Liz Cheney can continue in her leadership role as she continues to criticize former President Donald Trump, a sign that her days as GOP conference chair may be numbered.

“I have heard from members concerned about her ability to carry out the job as conference chair, to carry out the message,” McCarthy said on Fox News Tuesday. “We all need to be working as one if we we’re able to win the majority. Remember, majorities are not given, they are earned. And that’s about the message about going forward.”

McCarthy said that the issue with Cheney, the No. 3 House Republican, isn’t about her vote to impeach Trump but about party having a consistent message as it looks to regain control of the House in the 2022 midterm elections. Trump remains a force for motivating Republican voters.

Cheney was one of 10 House Republicans who voted to impeach Trump following the Jan. 6 riot at the Capitol by the former president’s supporters, and she fended off one attempt to oust her from her position. But she’s has become increasingly isolated in her party over her repeated criticism of Trump.

On Monday, Cheney accused Trump of “poisoning” U.S. democracy by repeating his false claims about the 2020 election. It was a tweeted response to a statement from Trump saying that the 2020 presidential election was fraudulent and should be “known as THE BIG LIE!”

Turning that phrase against him, Cheney said: “The 2020 presidential election was not stolen. Anyone who claims it was is spreading THE BIG LIE, turning their back on the rule of law, and poisoning our democratic system.”

While Cheney has continued to call out Trump, McCarthy has been using Trump’s name to raise money, noting in a campaign email solicitation sent Monday, that he had recently visited with Trump at Mar-a-Lago.

“In addition to talking about the future of the Republican Party and our plan to SAVE AMERICA, he asked why you STILL hadn’t stepped up to protect his critical America First Agenda,” McCarthy wrote. “There’s still time left to contribute before I give him an updated donor list, but you have to act IMMEDIATELY.”

Cheney, Wyoming’s sole representative in the House, and Trump have traded verbal broadsides since shortly after the Jan. 6th riot, which began after the then-president addressed a rally near the White House and encouraged his supporters to “fight like hell” and to march to Capitol Hill to oppose the certification of electoral college results.

She said in February that the Republican Party must acknowledge the damage done by Trump’s unfounded claims that the election had been stolen from him and his actions on Jan. 6, which led to his second impeachment.

Trump in turn has encouraged Wyoming Republicans to vote her out of office. After her tweet on Monday he issued a second statement, calling her a “warmonger” and predicting “she’ll never run in a Wyoming election again.”

Most other Republicans who had blamed Trump for stoking the mob that attacked the Capitol, including McCarthy, have since muted their criticism, as the former president continues to have a strong hold over many Republican voters.

The No. 2 House Republican, Representative Steve Scalise of Louisiana, when asked about Cheney in an interview with Axios on Friday said Trump “is still a very active part of our party” and who helped turn out millions of voters for Republicans and is key to GOP hopes to retake the House.

“This idea that you just disregard President Trump is not where we are,” added Scalise, who with McCarthy was one of 147 Republicans in Congress who voted -- after the riot -- to contest the 2020 presidential election results.