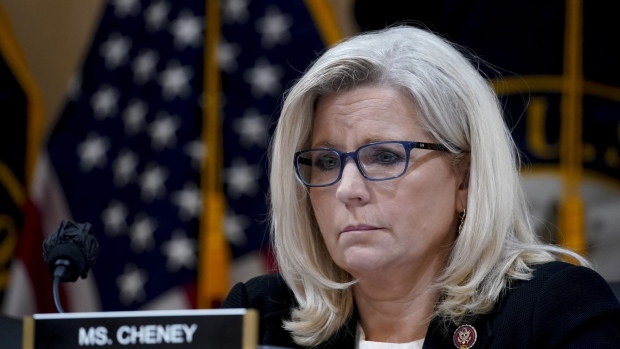 Representative Liz Cheney, a Republican from Wyoming, during a hearing of the Select Committee to Investigate the January 6th Attack on the US Capitol in Washington, D.C., US, on Tuesday, July 12, 2022. Whether far-right extremists who attacked the US Capitol were encouraged by or even conspired with then-President Donald Trump will be the subject of today's hearing by the House committee investigating the riot. , Bloomberg

(Bloomberg) -- Liz Cheney said Wednesday night that if she lived in Arizona she would be voting for Democratic gubernatorial nominee Katie Hobbs, the secretary of state, over fellow Republican Kari Lake, who has been endorsed by former President Donald Trump.

The Wyoming congresswoman and daughter of former Republican Vice President Dick Cheney also backed the Democratic candidate for Arizona secretary of state over the GOP nominee.

“I don’t know that I have ever voted for a Democrat. But if I lived in Arizona now, I absolutely would, for governor and for secretary of state,” Cheney said, during an appearance at a McCain Institute event in Tempe.

Lake, a former news anchor, has embraced Trump’s unfounded claims that the 2020 election was stolen. Polls show her race against Hobbs to be close.

The Republican candidate for secretary of state, Mark Finchem, also denies that President Joe Biden won the 2020 election. Trump has endorsed him in his race against Democrat Adrian Fontes.

“We cannot be in a position where we elect people who will not fundamentally uphold the sanctity of elections. That’s got to be more important than anything else,” Cheney, who was defeated by a Trump-backed rival in an August primary, said at the event held on Arizona State University’s campus in Tempe.

Her comments came when she was asked by a member of the audience whether Republicans alienated by the Trump tilt of the GOP should consider moving to a third party.

Cheney, who is vice chair of the House Committee investigating the Jan. 6, 2021, insurrection at the US Capitol, is one of the Republican Party’s fiercest critics of Trump. She responded she was “not ready to say we’re going to allow Trump and those who are at war with democracy to hijack our party. I’m not ready to give that fight up.”

While declaring the Republican Party to be “in a very bad state,” Cheney urged Republicans to battle “anti-democratic” forces within the party at the state and local levels, such as by running for precinct chairs and other posts.

Trump plans to hold a rally in Mesa, Arizona, on Sunday.