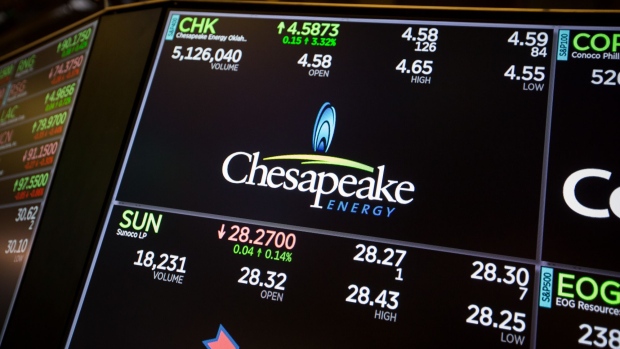 A monitor displays Chesapeake Energy Corp. signage on the floor of the New York Stock Exchange (NYSE) in New York, U.S., on Monday, Sept. 24, 2018. U.S. stocks fell to their lows of the day after reports that Deputy Attorney General Rod Rosenstein will leave his post. Photographer: Michael Nagle/Bloomberg , Bloomberg

The deal, which is expected to close by the end of the first quarter, will allow Chesapeake to increase its annual base dividend by 14% starting in the second quarter, according to a statement Tuesday. Shares rose as much as 2.8% in New York.

The company also agreed to sell its Powder River Basin assets in Wyoming to Continental Resources Inc. for approximately $450 million in cash.

The Chief purchase grows Chesapeake’s foothold in the Marcellus Shale of Pennsylvania, the largest gas play in the U.S. The country’s gas sector faces increasing pressure from investors to consolidate in a bid to scale up, cut costs and grow production without drilling new wells. Southwestern Energy Co. agreed to buy Indigo Natural Resources for about $2.7 billion in September, while shale giant EQT Corp. bought assets from Alta Resources in a $2.9 billion deal that closed during the third quarter.

“In less than a year, we have achieved our goal of refocusing and high-grading our portfolio around our core assets, positioning us to generate meaningful returns for shareholders,” Chesapeake Chief Executive Officer Nick Dell’Osso said in the statement.

The deal is expected to immediately increase the company’s operating and free cash flow, while growing its Marcellus gas production capacity by up to 200 million cubic feet a day. The sale of the oil-producing Wyoming assets will help fund the Chief purchase. The transaction will improve the company’s greenhouse gas emissions metrics, it said.