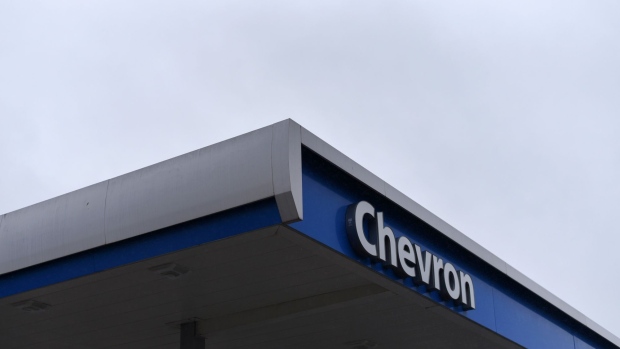 (Bloomberg) -- Venezuela’s government and Chevron Corp. are in preliminary talks to give the company greater control of some operations in exchange for debt relief as the country’s socialist leaders try to increase production despite U.S. sanctions.

The head of Chevron’s Venezuela unit, Javier La Rosa, and the president of state oil company PDVSA, Asdrubal Chavez, have been involved in the discussions, according to two people with knowledge of the matter. Before any agreement can be reached, however, Chevron would need a special waiver from the U.S. Treasury allowing it to engage in more formal negotiations.

The company is simultaneously requesting the license from the Treasury’s Office of Foreign Assets Control, which oversees foreign sanctions, according to a third person with knowledge of the situation. The four fields Chevron and PDVSA jointly operate produced more than 200,000 barrels prior to sanctions, compared to the current output of 140,000 barrels a day.

“We continue to conduct our businesses in compliance with the current sanctions framework provided by the U.S. Office of Foreign Assets Control,” Chevron spokesman Ray Fohr said in a statement responding to questions. He said the company does not comment on rumors or speculation.

A Treasury official declined to comment. A spokesperson for PDVSA did not immediately respond to messages.

The discussions with Chevron reveal how President Nicolas Maduro’s government is willing to cede parts of its prized oil industry to outside companies as it attempts to increase production to his latest target of 2 million barrels a day. By using local contractors and importing additives from Iran, the country has managed to more than double output to around 800,000 barrels a day from a seven-decade low it hit in 2020. Foreign companies like Chevron are critical if the country is to pump more.

In one scenario under discussion, PDVSA would keep financial control in joint ventures with Chevron, but turn over the operational lead on matters such as contracting, accounting, paying service providers, and technical decisions, according the people. In exchange, Chevron would increase its revenue from the ventures and deduct those sales from the more than $3 billion it is owed by PDVSA, the people said.

The debts relate to old Chevron investments and sales it was not able to book due to the sanctions.

The talks began about three months ago, according to one of the people. Chevron and PDVSA regularly hold meetings about business related to their joint operations, which are permitted under the sanctions.

The San Ramon, California-based company is one of few oil majors to keep operations in Venezuela. France’s TotalEnergies SE, Norway’s Equinor ASA and others have mostly pulled out in recent years as conditions in the country deteriorated and the risks of doing business increased due to U.S. economic sanctions first put in place 2017.

Chevron has a minority stake in its four joint ventures with PDVSA, operating under a Treasury license that allows it to do the bare minimum to preserve assets and protect employees. Chevron’s license expires in June and the company is requesting a renewal that may allow it to sell its Venezuelan production to the U.S., the people said.

Under Venezuelan law, foreign companies cannot own more than 49.9% of operations. Chevron has stakes of about 25% to 39% in the joint ventures, which accounted for roughly 17% of PDVSA’s output in January.

Chevron and PDVSA have also discussed a scenario under which the U.S. eases some sanctions on the oil industry. In that case, PDVSA would give up its majority stakes in the joint ventures to Chevron. Such a change would require a change in Venezuelan law, according to one of the people.

U.S. restrictions have effectively frozen Chevron’s activities in Venezuela since April 2020. It is banned from investing to boost production or from collecting revenue from the joint sales, leaving debts to accumulate. U.S. firms are prohibited from financial dealings with the government or its agencies under the sanctions.

U.S. officials have said they are open to discussing sanctions relief if Maduro’s government makes commitments to end a political crisis and hold fair elections. As of yet, the U.S. has made no change to its policy. Venezuelan opposition leader Juan Guaido, who is supported by the Biden administration, said last week that an easing of some sanctions is on the table.