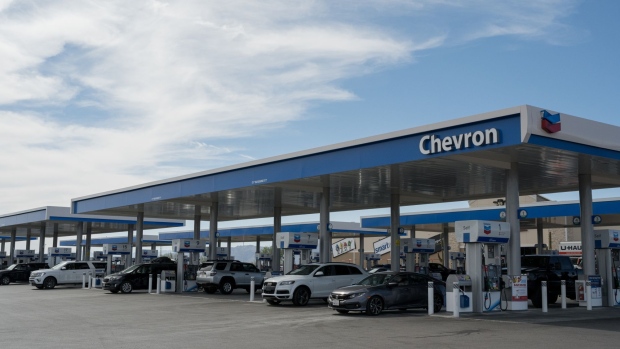 Motorists refuel at a Chevron gas station in Jean, Nevada on October 21, 2021. The national average price for a gallon of gasoline rose six cents over the past week to hit $3.38. The pump price has gone up every day in the past 27 days, adding approximately 20 cents to the cost of a gallon of gas, reported the American Automobile Association (AAA). Photographer: Bridget Bennett/Bloomberg , Bloomberg

(Bloomberg) -- Chevron Corp. boosted its planned share buyback to as much as $5 billion per year, as the oil giant uses higher commodities prices to step up returns to investors rather than investing in production growth.

The repurchases are now seen at $3 billion to $5 billion a year, about 60% higher than previous guidance, the company said Wednesday in a statement. Capital spending next year will be $15 billion, the low end of a previous forecast and 25% below pre-pandemic levels.

The California-based oil giant generated the most free cash flow in its 142-year history during a third quarter in which oil and gas prices surged. But the company is wary of plowing that cash back into new production at a time when crude prices have sharply pulled back and the emergence of the omicron variant raises concerns about global oil-demand recovery.

The budget reflects “Chevron’s enduring commitment to capital discipline,” Chief Executive Officer Mike Wirth said in the statement. It’s “at a level consistent with plans to sustain and grow the company as the global economy continues to recover.”

Despite the tight purse strings, Chevron will spend $3 billion this year in the Permian, the world’s largest shale basin in West Texas and New Mexico. That’s a 50% increase from last year’s budget and a sign of the basin’s growing importance within Chevron’s overall portfolio. About $2 billion goes to the giant Tengiz project in Kazakhstan.