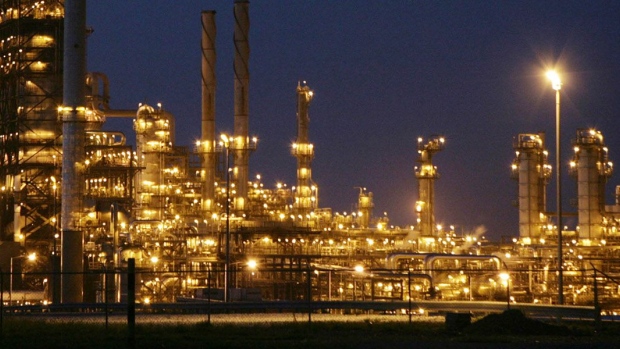 A night view of Ameriven oil refinery, one of the four companies at the Jose Complex in Anzoategui state, 200 miles East from Caracas, Venezuela, on Thursday, Sept. 13, 2007. Photographer: DIEGO GIUDICE/Bloomberg , Photographer: Diego Giudice/Bloomberg

(Bloomberg) -- The Trump administration is ready to unleash the full impact of sanctions on Chevron Corp.’s operations in Venezuela as the U.S. seeks to further squeeze the Maduro regime.

While no decision has been made, it’s increasingly unlikely that the U.S. will again extend to Chevron a waiver to access Venezuela’s crude reserves, people familiar with the matter said.

The Treasury Department last month granted Chevron its fourth waiver since sanctions were announced in late 2018. When that expires on April 22, it probably won’t be renewed, the people said, speaking on the condition of anonymity because they weren’t authorized to discuss the matter publicly.

A spokeswoman for the Treasury Department, which oversees sanctions implementation, did not immediately reply to a request for comment. A Chevron spokesperson couldn’t immediately comment.

While Venezuela accounts for only about 1% of Chevron’s global crude production, it remains strategically important given the nation’s vast untapped reserves. Proponents of Chevron’s position argued that withdrawing would cede market share and influence to Russian and Chinese companies.

Chevron is the last remaining major U.S. explorer in the country. Rivals Exxon Mobil Corp. and ConocoPhillips exited a decade ago after then-President Hugo Chavez seized control of their assets.

To contact the editors responsible for this story: Alex Wayne at awayne3@bloomberg.net, ;Simon Casey at scasey4@bloomberg.net, Joe Carroll, Mike Jeffers