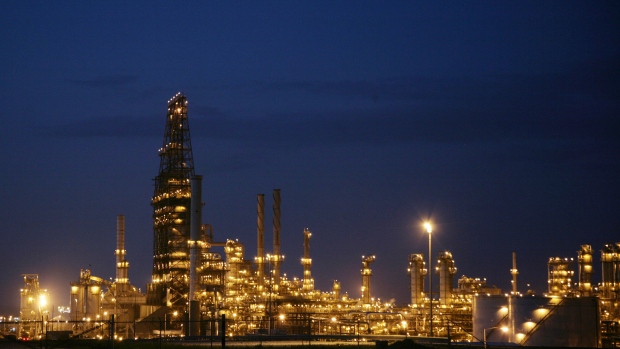 A night view of Ameriven oil refinery, one of the four companies at the Jose Complex in Anzoategui state, 200 miles East from Caracas, Venezuela, on Thursday, Sept. 13, 2007. , BLOOMBERG NEWS

(Bloomberg) -- Chevron Corp. wants more control over the oil it produces in Venezuela, a move that would help the driller boost output and recover debt if the US eases sanctions amid a global fuel crunch.

The energy giant is seeking to take charge of production, shipment and sales of its Venezuelan crude, according to people familiar with the matter. Javier La Rosa, president of Chevron’s operations in the Latin American country, and Venezuela Oil Minister Tareck El Aissami have been meeting since late May to negotiate a new contract, the people said.

The proposal would mark a major shift as Chevron would take the lead in all facets of its operations in joint ventures with state energy company Petroleos de Venezuela SA, according to the people. Under the proposed arrangement, San Ramon, California-based Chevron would negotiate with suppliers and importers and handle financing, sending the final payment to PDVSA through the central bank, they said.

El Aissami and a representative of Venezuela’s oil ministry didn’t immediately respond to requests for comment. Ray Fohr, a Chevron spokesman, said the company doesn’t comment on rumors or speculation and continues to conduct  its businesses in compliance with the sanctions framework provided by the U.S. Office of Foreign Assets Control.

“We are a constructive presence in Venezuela, where we have dedicated investments and a large workforce who are dependent on our presence,” Fohr said. “We remain committed to the safety and wellbeing of our employees and their families, the integrity of our joint venture assets, and the company’s social and humanitarian programs during these challenging times.”

Revamping the contract would leave Chevron primed to boost production quickly if the US eases sanctions against Venezuelan oil, and would allow it to recover money it’s owed by PDVSA. If  Chevron reaches a deal with Venezuela and the Biden administration lifts sanctions, the US driller could increase the amount it pumps to around 200,000 barrels a day in six months from 150,000 currently, according to one of the people. The oil giant’s Pascagoula refinery in Mississippi was engineered to run on heavy crude from Venezuela.

Chevron’s move comes as the global energy crisis adds momentum to the company’s push to boost output in Venezuela, where it began exploring for oil about a century ago. While US retail gasoline prices have eased from recent records, President Joe Biden remains under pressure to relieve pain at the pump and offset the impact of sanctions on Russian supply. The US has already allowed Eni SpA and Repsol SA to import Venezuelan crude and count the cargoes toward PDVSA’s debt to the European energy companies.

In May, the US said it would allow Chevron to negotiate its license with PDVSA and has said it’s willing to ease some sanctions on Venezuela if Maduro agrees to political concessions. So far, the restrictions have remained in place. Chevron and a handful of US oil-service providers can keep a limited presence in the OPEC-member country, but they can’t make any new investments nor export Venezuelan crude.

Venezuela sits atop the world’s largest proved crude reserves, but production has tumbled due to years of government mismanagement, a lack of investment and years of sanctions. It pumps around 710,000 barrels a day, compared to more than 3 million at its peak.

The Biden administration has said any lifting of sanctions depends on Maduro restarting political negotiations with the opposition and making concessions ahead of 2024 presidential elections. Venezuelan government and opposition representatives held preliminary meetings in Caracas last week.

Sanctions-hit PDVSA is limited in its ability to sell oil to traders and pay contractors. Proposals being discussed by Chevron include reducing some of PDVSA's partners' exposure to sanctions by trimming the state-owned company’s stake in joint ventures, according to one of the people.  That would require amending Venezuelan law, which currently requires majority ownership for PDVSA. Foreign partners account for about 50% of the Venezuelan producer’s output.

Chevron is also trying to determine how much PDVSA owes it for oil sold from their four joint ventures since 2019, when sanctions prevented the US driller from earning revenue from the partnerships.