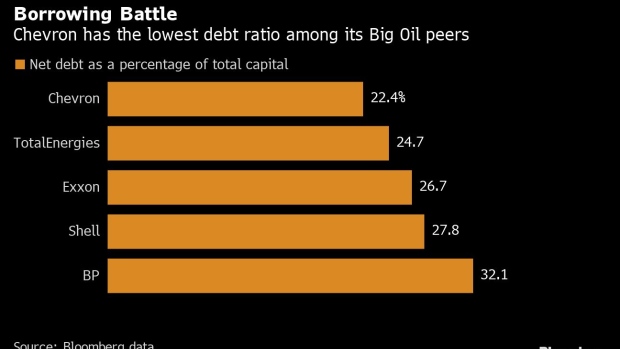 A customer refuels at a Chevron Corp. gas station in San Francisco, California, U.S., on Wednesday, July 7, 2021. The average price of gas nationwide has climbed to $3.13, a high for the year and up 40% since January 1, CBS News reports. , Bloomberg

(Bloomberg) -- Chevron Corp. is reviving share buybacks that were suspended more than a year ago, signaling confidence that strong cash flows from high commodity prices will be sustained well into the future.

The repurchases will begin during the current quarter and range between $2 billion and $3 billion a year, around half the amount it devoted to the program before it was suspended in early 2020. Chevron’s move followed similar steps by Royal Dutch Shell Plc and TotalEnergies SE, which reinstated buybacks on Thursday. Stock repurchases are being revived or raised across the board as sectors as diverse as steelmakers, retailers and manufacturers ride the crest of economic expansion.

Big Oil executives are seeking to reward shareholders as commodity prices rise, a turnabout from previous booms when excess cash was poured into costly growth projects. Faced with enormous climate challenges, the industry is attempting to entice investors by offering robust returns at a time when the dividend yield of the S&P 500 Index is at the lowest in almost two decades.

Chevron earned $1.71 a share, on an adjusted basis, during the second quarter, the company said in a statement, trouncing the $1.60 average estimate among analysts in Bloomberg survey. Capital spending in the first half dropped by a third compared with a year earlier while crude prices rallied more than 50%, flooding the explorer with more than enough cash to resurrect buybacks.

The repurchasing program comes on top of Chevron raising its dividend earlier this year, becoming the only Western oil supermajor to lift the payout above pre-pandemic levels.

Even with recent increases, Shell’s and BP Plc’s dividends still lag pre-Covid-19 payouts. Exxon Mobil Corp. held its dividend steady earlier this week and is expected to devote excess cash to debt reduction rather than buying back shares. Key to Chevron’s strength is that it entered the pandemic in a stronger financial position than rivals, with a low debt burden.

“Our free cash flow was the highest in two years due to solid operational and financial performance and lower capital spending,” Chief Executive Officer Mike Wirth said in the statement.

The buyback also signals a bullish view of the future. In recent months, Chevron’s management indicated that any buyback must be sustained even in periods of low oil prices. As such, they said they would monitor key macroeconomic indicators such as the global economic recovery, crude stockpiles, and how fast the Organization of Petroleum Exporting Countries and its allies expand output.

Chevron’s adjusted second-quarter profit was $3.3 billion, compared with a $2.9 billion loss a year earlier. The main profit drivers were higher oil and natural gas prices, while the company also benefited from a chemical boom and a rebound in U.S. refining. International refining still showed signs of weakness due to the pandemic.