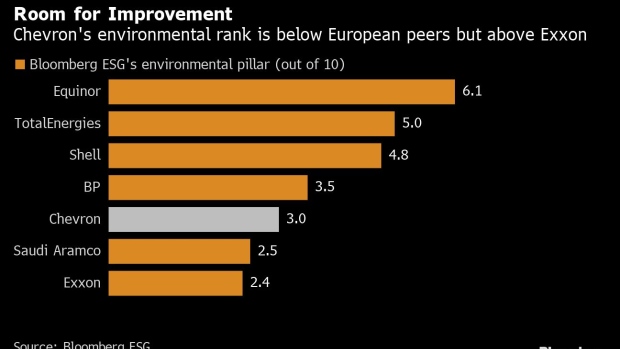 (Bloomberg) -- Chevron Corp. will triple investments in lower-carbon technologies through the next seven years while putting off a pledge for net-zero emissions in contrast to its European peers.

The oil giant will spend $10 billion through 2028 on hydrogen, renewable natural gas, and carbon capture, with 20% of that allocated to reducing the carbon intensity of its operations, the San Ramon, California-based company said in a statement Tuesday. Chevron’s commitment to a “pathway to net zero” falls shorts of plans by its competitors like BP Plc and Royal Dutch Shell Plc, which have set explicit targets to eliminate emissions by mid-century.

“We have favored action over pledges,” Chief Executive Officer Mike Wirth said on a call with reporters. “We have not at this point declared a net-zero 2050 ambition as others have because we are still working on all of the elements that we believe will be essential in order to get there.”

Chevron intends to grow production of fossil fuels and is binding its climate efforts with a strategy of improving financial returns, arguing that one without the other won’t work for shareholders and the environment. The approach contrasts with that of its European peers, which are planning long-term pivots toward more renewable energies over time.

“We are surprised that the release does not mention any longer-term ‘net-zero’ related targets like some of its peers have announced recently,” Biraj Borkhataria of RBC Capital Markets wrote in a note. Chevron’s emissions targets are “conservative and we were expecting the company to increase its ambition.”

Chevron’s ability to buy other companies may have something to do with its aversion to promises of cutting absolute levels of carbon emissions. It has the strongest financial position among the world’s oil majors and can grow not only through investing in its existing oil fields but also through acquisitions. In that sense, it could be more favorable to stick to targets to reduce emissions intensity, or pollution per unit of energy.

“The real issue here is demand, and demand is growing,” Wirth said. “The world should want production to come from the most carbon efficient and carbon responsible producers as long as the world is using oil and gas. I don’t see this as a question of you must limit the size of your business.”

Whether that’s enough to satisfy shareholders remains to be seen. Chevron’s presentation comes less than four months after U.S. rival Exxon Mobil Corp. was forced to replace a quarter of its board with more climate-friendly directors after a successful activist campaign gained support from Wall Street’s biggest investors. Chevron’s board received its own wake-up call in May when investors voted against its recommendations in favor of reducing the company’s so-called Scope 3 emissions, or those from fuel and other products it makes.

Raising investments in low-carbon technologies is “a relatively modest step when what is needed is a giant leap,” said Andrew Logan of Ceres, a non-profit coalition of companies and investors who manage more than $47 trillion. Chevron should adopt the shareholder vote and set a target to reduce Scope 3 emissions, he said.

The company will respond to the shareholder vote in a report next month after consultation with the board, according to Wirth.

Chevron’s environmental pillar score of 3.01 out of 10 is below those of Equinor ASA and Shell, but surpasses Exxon, Saudi Aramco, and the state-backed oil majors in Russia and China, according to Bloomberg’s ESG ratings.

(Updates with shares in eighth paragraph and additional details from CEO throughout.)