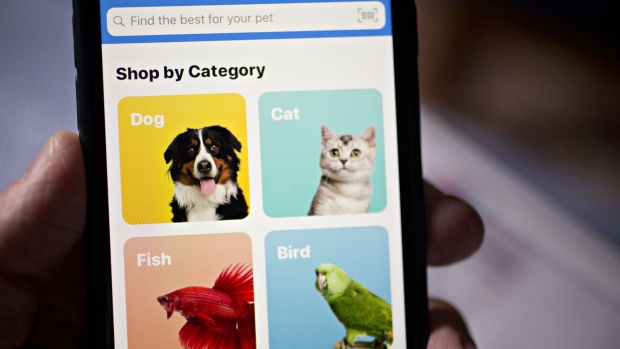 The Chewy.com application is displayed on an Apple Inc. iPhone in an arranged photograph taken in Arlington, Virginia, U.S., on Thursday, June 13, 2019. PetSmart Inc. is taking Chewy public at a proposed valuation of around $7 billion after a contentious ownership battle between PetSmart's creditors and its private equity investors. , Bloomberg

Chewy Inc. dipped Wednesday as investors mulled the company’s US$20.6 billion valuation after quarterly results handily beat Wall Street expectations and management issued a strong outlook for the the next three months.

The online pet-products retailer has been among the biggest beneficiaries of the pandemic as people ordered supplies online amid shelter-at-home orders and adopted a furry friend for the lockdown.

Shares slipped as much as 2.9 per cent in trading before the market open in New York after closing at a record on Tuesday before the earnings.

Optimistic analysts highlighted that the underlying revenue growth rate appears sustainable at least for the near-term and the company’s chief executive officer told Bloomberg News that the heightened demand is “here to stay.”

Analysts noted the implied revenue growth outlook from management for the year’s second half is closer to 30 per cent, signaling a slowdown, however they agreed that is likely a conservative estimate.

Chewy stock has more than doubled from an IPO last June and was up more than 75 per cent this year through Tuesday’s close. 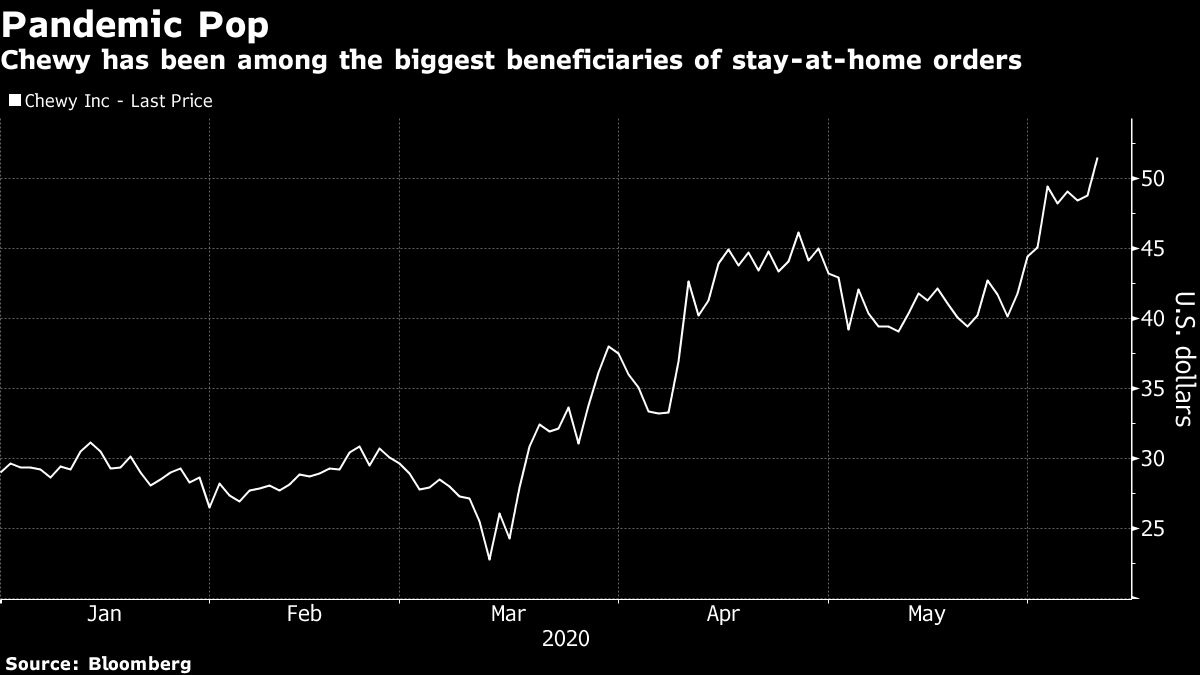 Here’s what analysts are saying about Chewy’s results:

The solid results highlighted Chewy’s “position as a key beneficiary of a shift to online in essential categories (like pet) driven by the pandemic.” The sales growth slowdown implied by full year guidance is “likely a reflection of Chewy being pragmatic during heightened uncertainty.”

Boosts 2020 and 2021 revenue estimates by 6 per cent and 8 per cent, respectively, and sees the shift to online likely to be a permanent benefit to the top-line.

Earnings and outlook suggest “the company is at an inflection point and that it is a structural winner from the COVID crisis. Pet product purchases have meaningfully accelerated their online adoption, and we don’t expect a reversion.

Outperform, price target raised to US$62 from US$40.

Chewy’s revenue strength continued as the “underlying ~40% revenue growth rate appears sustainable at least in the near-term with the company indicating that new customers acquired during the pandemic are spending more per order than new customers historically, are more frequently making repeat orders and are exhibiting similar Autoship behavior.”

Sees second-quarter expectations as “reasonable” though full-year forecasts for a slowdown in the second half are “likely conservative.”

“Cost headwinds associated with meeting surging demand in the first-quarter are subsiding, implying that Ebita margins could potentially improve from first-quarter.”

Outperform rating, price target boosted to US$55 from US$53 as “sustainable growth, positive industry dynamics and reasonable valuation” drive him to tick estimates higher.

The results were highlighted by “46 per cent revenue growth driven by a record high new active customer adds at and continued margin leverage” with fundamentals keeping the analyst positive on shares.