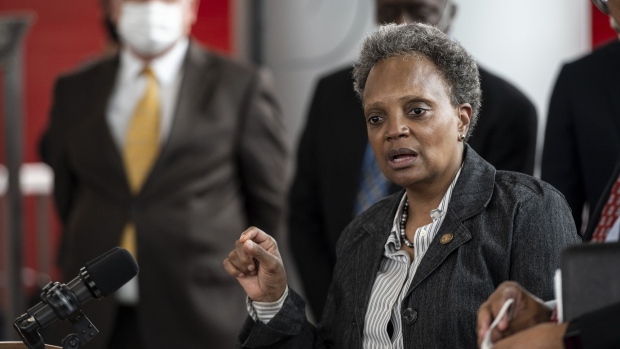 (Bloomberg) -- The Chicago City Council on Wednesday approved a $16.7 billion budget for 2022 designed to help the city recover from losses sustained during the pandemic, through measures including one of the biggest guaranteed basic income programs in the country.

Mayor Lori Lightfoot’s plan relies on both federal aid and higher property tax revenues, among other sources of income. That revenue is helping to cover higher pension fund and labor costs. She closed a $733 million deficit in the city’s $4.9 billion corporate fund, which pays for basic operations and services.

Chicago’s budget represents a turnaround from 2020, when the city was concerned about the impact the pandemic could have on its credit rating. Now it is embarking on a plan to sell as much as $4.4 billion in debt in 2022, and this week Fitch Ratings boosted the city’s outlook to stable from negative.

“Overall the city’s budget is fairly robust and well balanced, and federal stimulus is a strong tailwind,” said Dennis Derby, a portfolio manager for Wells Fargo Asset Management, which holds Chicago debt. “We will be interested in how the city will budget going forward as those revenues ebb.”

Chicago’s structural financial problems are far from over and Moody’s Investors Service rates the city’s debt as junk. The city faces more than $31 billion of unfunded pension liabilities after years of inadequate contributions. It’s endured about a decade of annual budget deficits.

The city focused on balancing financial needs, including paying for pensions, with the needs of communities hardest hit by the pandemic and recession, Chief Financial Officer Jennie Huang Bennett said during the budget process.

The plan boosts the city’s total retirement contributions for fiscal 2022 to $2.3 billion across four funds, an increase of about $460 million from 2021. At the same time, the budget is pushing forward the city’s guaranteed basic income plan and increasing spending on housing, violence prevention and mental health.

The easing of the city’s financial stress is evident. Last year Lightfoot had faced “painful” choices to close the record budget shortfall caused by the Covid-19 virus and business shutdowns. Now she’s seeing tax revenues rise more than expected, the economy recovering, albeit slowly, and $1.9 billion in American Rescue Plan Act funds coming from the federal government over years.

Chicago Revenue in First Half 2021 Tops Budget Forecast by 6.5%