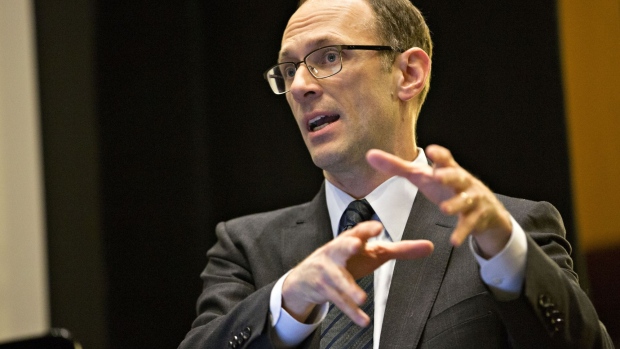 (Bloomberg) -- The Federal Reserve Bank of Chicago appointed Austan Goolsbee, an economist and former adviser to President Barack Obama, as its new president to replace Charles Evans, who retires in January.

Goolsbee, 53, who is currently a professor of economics at the University of Chicago Booth School of Business, will start on Jan. 9, the Chicago Fed said in an emailed statement Thursday.

Evans will retire after 15 years helming the Chicago Fed and has through most of his tenure been among the US central bank’s most dovish policymakers.

While economists welcomed the selection of a highly-credentialed colleague to the position, US Senator Robert Menendez, a Democrat from New Jersey, expressed dismay that yet again, the US central bank had missed an opportunity to bring a Latino American into its leadership ranks.

Goolsbee will hold a vote on policy decisions undertaken by the central bank’s interest-rate setting Federal Open Market Committee in 2023 as it seeks to slow and eventually stop the aggressive monetary tightening campaign it launched this year.

In an Oct. 31 Bloomberg Radio interview, Goolsbee said a peak for the benchmark federal funds rate around 5% “kind of makes sense to me.”

“They’ve got to get core inflation down to convince people, the markets, expectations, etcetera, that the high inflation is behind us,” he said. “If they don’t do that, the terminal rate’s got to be higher than it is.”

The Chicago Fed president has somewhat more influence on FOMC decisions because it holds a vote every other year, whereas presidents of most other reserve banks only rotate into the annual voting panel once every three years.

“Austan is a deeply committed policymaker and leader,” said Janice Eberly, a senior associate dean at Northwestern University’s Kellogg School of Management in Evanston, Illinois. “He understands from experience the trade offs inherent in policy decisions. He’ll bring seasoned economic judgment and viewpoint to the Fed.”

Goolsbee, who served as chair of Obama’s Council of Economic Advisers in 2010 and 2011, pointed in the Oct. 31 Bloomberg radio interview to supply shocks as a “significant component” of the inflation the US has experienced this year. He cited Covid-related lockdowns in China, Russia’s invasion of Ukraine and the Mississippi river drying up.

“When you have supply shocks, the Fed cannot fix that problem,” he said. “The Fed can raise interest rates. The Fed can raise unemployment. But higher unemployment is not going to bring down prices if a large component of that inflation is coming from these kind of supply things.”

The Fed’s preferred measure of prices rose 6% in the 12 months through October, according to Commerce Department data published Thursday, down from 6.3% the month before. That followed a similar Labor Department report on consumer prices released earlier in the month, which fueled a market rally on hopes that softer inflation would lead the Fed to slow its pace of tightening.

In a Nov. 25 television interview on Fox Business, Goolsbee cautioned that inflation may be slow to come down.

“We got one good month of inflation data, but let’s be a little circumspect. That happened a few months ago in July: We got a decent month of new inflation, but then it kicked back up in the summer,” he said. “I hope that we have peaked, but I think the rate at which it comes down might not be as rapid as everyone wants.”

The Fed system has come under pressure from advocates including Menendez to appoint a Latino American to its leadership ranks. While the central bank has made strides toward more diverse leadership this year -- including naming Susan Collins as the first Black woman to lead a Fed bank in Boston -- none of the regional reserve banks has ever had a Latino president.

Some have viewed the open slot in Chicago -- and another in Kansas City, which has yet to announce a replacement for its outgoing president, Esther George -- as opportunities for the Fed to bring a Latino American into its leadership ranks.

“It is unacceptable, and quite honestly a slap in the face to the 65 million Latinos in the country, that the Federal Reserve Board of Governors has ignored calls from Congress for a more inclusive and transparent leadership selection process,” Menendez said in a statement.

“The Board has chosen to yet again forgo the historic opportunity to give the Latino community a true voice in an institution that makes far-reaching decisions about our economy -- perpetuating a legacy that has shut out Latinos from the upper echelons of leadership at the Fed.”

While the Fed’s Board of Governors in Washington is not directly involved in the process of selecting regional Fed presidents -- which is conducted by the boards of directors of the regional reserve banks themselves -- it does ultimately confirm or veto the final selection.

--With assistance from Steve Matthews and Catarina Saraiva.