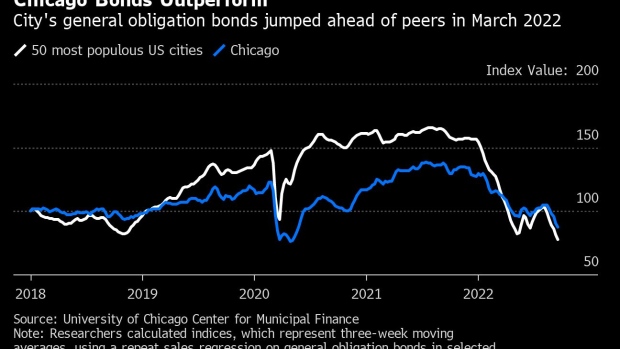 (Bloomberg) -- Investors are more bullish on Chicago now than they have been in years as the city’s fiscal outlook brightens, causing their outstanding bonds to perform better than those of other big cities.

The third-largest US city has long struggled with a poor credit rating, dragged down mostly by its underfunded pensions. But the city’s financial picture has begun to turn around, with stronger-than-expected revenue and progress on payments to retiree benefits.

As Chicago gears up for a $700 million to $900 million bond sale later this fall -- including its first ESG issuance -- pricing data from secondary market trading bodes well for investors in Windy City debt. According to an index from the University of Chicago Center for Municipal Finance, in March 2022 Chicago’s bonds moved into the top one-third of all large cities after lagging behind their peers from 2019 to 2021.

The index tracks price changes across general obligation bonds in 50 major cities from a January 2018 baseline, with rising index values indicating higher prices, and correspondingly lower yields. Even as the municipal-bond market is down overall, Chicago bonds have been outperforming their peers, with an index reading of 87.7 on Sept. 19 as compared to 77.8 for the 50 most populous US cities.

“A lot of investors are looking at Chicago and saying that its outlook is as good as any large city at the moment,” Justin Marlowe, a public finance research professor at the University of Chicago who led the data analysis, said in an interview.

“Investor sentiment is a reflection of the stabilizing fiscal conditions,” Marlowe wrote in an email to Bloomberg.

The city’s newfound stable footing stems from an influx of federal funding -- to the tune of $1.9 billion via the American Recovery Plan Act -- and a windfall boost in tax collections, which brought the city’s revenue forecast to $5.26 billion, up $260 million from August projections.

The extra cash allowed Mayor Lori Lightfoot to nix her planned 2.5% property tax increase and propose a $242 million advance payment to the city’s four employee pension funds in her 2023 budget. The city is expected to make statutorily required contributions to those funds for the second time next year -- a step which Marlowe said “sends the right message to taxpayers, business leaders, investors, state legislators and other stakeholders.”

City Hall is also proposing a permanent change to it’s contribution policy which they believe will put the city on better financial footing going forward.

Chicago general obligation bonds are rated BBB+ by S&P Global Ratings and Fitch Ratings, and Ba1 by Moody’s Investors Services. Jane Ridley, a senior director at S&P focused on Chicago, said any fiscal progress is a positive for Chicago.

The city’s credit quality might dissuade some investors from buying the bonds in an environment of interest rate hikes, said Dennis Derby, a portfolio manager at Allspring Global Investments -- but the financial story of the city is still “fairly strong,” he said.

While “there’s been a good bit of noise about some businesses leaving the city,” Google recently buying the downtown Thompson Center is “a pretty bullish sign,” he added. “So, while overall we’re optimistic, we are cautious in our outlook.”

Google will bring at least 3,000 jobs to the city, Lightfoot has said, and the company is one among 173 that have moved to or expanded in Chicago this year against the backdrop of high-profile corporate departures that include hedge fund Citadel, Boeing Co. and most recently meat company Tyson Foods Inc.

Marlowe noted that Chicago attracted strong interest in its $1.8 billion bond deal for O’Hare International Airport this summer -- the largest municipal airport transaction this year. And city officials have said that investors are especially keen on green and social bonds that will become available this fall -- likely in November -- to support the Chicago Recovery Plan. The city is also planning on selling water and sewer bonds in the first quarter of 2023 and is gearing up for Midway International Airport financing after that, Bennett said.