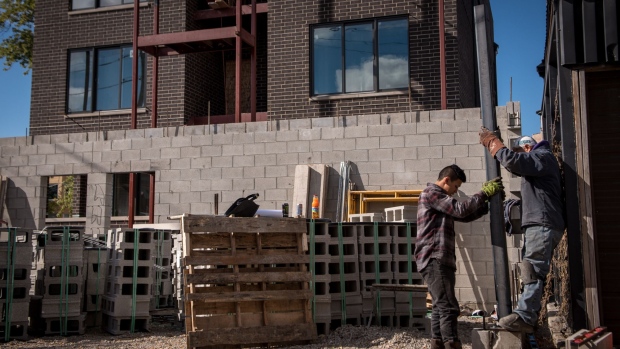 A pedestrian walks along a platform as a train arrives at a Chicago Transit Authority (CTA) station in Chicago, Illinois, U.S., on Wednesday, June 3, 2020. Businesses will look to recover from their losses as they welcome customers for the first time in months on Wednesday, when Chicago enters the third phase of its reopening plan during the pandemic. Photographer: Christopher Dilts/Bloomberg , Bloomberg

(Bloomberg) -- Chicago is poised to be a frequent issuer in the $4 trillion municipal-bond market through the end of next year for projects and refinancing if the city council approves Mayor Lori Lightfoot’s borrowing plans as part of her 2022 budget proposal.

Lightfoot’s administration is seeking authorization from aldermen to issue as much as $4.41 billion of bonds, most of which would be sold next year, according to Chief Financial Officer Jennie Huang Bennett. That amount would include $2.06 billion in new money and $2.35 billion for refinancing old debt. That’s in addition to the city’s already authorized issuance of up to $4.66 billion, Bennett said.

“It’s a robust bond program,” Bennett said in an interview. “Interest rates are extraordinarily low. The city’s credit spreads have come in significantly since we started the economic recovery from Covid.”

While Chicago still has a junk rating from Moody’s Investors Service, both S&P Global Ratings and Fitch Ratings consider the city’s debt to be investment-grade at three notches and one level above junk respectively. The city has seen its financial strain ease amid the broader economic recovery and the influx of federal relief. Chicago is set to receive nearly $1.9 billion from the American Rescue Plan.

The city’s bond ordinance proposal seeks authorization to sell $660 million in general obligation bonds that could be offered in several tranches starting in the second quarter of 2022. The ordinance also asks to issue $1.2 billion, split evenly between new debt and refinancing bonds, in the first half of next year for water and wastewater projects.

The full city council is scheduled to hold a budget hearing on Thursday, and aldermen are expected to vote on the budget and related bond ordinances on Oct. 27.

The council has already approved the sale of as much as $1.2 billion in G.O. and sales-tax-backed bonds to refinance old loans by the end of this year. City officials expect the refinancing, pending some federal legislative action, to lower the interest rate on outstanding bonds to as low as 2% from 5%. Of the $254 million in interest savings projected from the deal, $232 million would go to police back-pay and $22 million would help close the $733 million deficit that the city faces in 2022.

The city also has approval for a tender exchange of up to $1.2 billion but may not tap the full amount, Bennett said. And $760 million of new debt for O’Hare and $1.5 billion for a multi-year public works program starting the middle of next year have also been approved.

“It’s a great time for the city to be in the market,” Bennett said