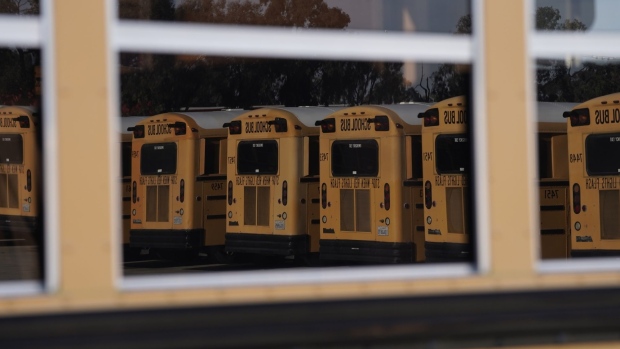 Navistar International Corp. school buses are seen reflected in the window of a bus stored at the San Diego Unified School District Transportation Department in San Diego, California, U.S., on Thursday, July 9, 2020. The U.S. economy is caught in the middle of President Trump's tug-of-war to reopen schools -- and could end up damned no matter what happens. Photographer: Bing Guan/Bloomberg , Bloomberg

(Bloomberg) -- The Chicago Teachers Union wants the country’s third-largest public school system to enact remote learning this fall, and union leaders may meet next week to consider a potential strike if the district moves forward with a hybrid reopening that includes in-person learning.

The union, which held its longest walkout since 1987 less than a year ago, plans to convene its House of Delegates early next week to discuss a rank-and-file process to take a strike vote to demand remote learning for Chicago schools, according to a person close to the union. Chicago Public Schools on July 17 said the district plans to begin the new school year in September with a hybrid model of in-person and remote learning, and would shift to at-home classes if COVID-19 cases begin to rise.

The decision of whether to send students in-person to schools or start the new academic year remotely has gripped parents, teachers, administrators and public officials. The debate stretches from kindergarten classrooms through universities. Questions of health, public safety and the nation’s economic recovery have weighed on educational planning across the U.S.

“The infrastructure just isn’t here right now for the Chicago Public Schools to open up and keep people safe,” Stacy Davis Gates, vice president of the Chicago Teachers Union, said on Bloomberg Television on July 31. “Any plan that is being presented is a plan that only mitigates harm. It doesn’t protect us from harm.”

Schools’ reopening decisions vary across the U.S., but calls for strikes have not flared up in the largest districts outside of Chicago. In New York City, home to the largest school system in the U.S., the Covid-19 infection rate must be below 3% in order for schools to reopen and stay open, Mayor Bill de Blasio said last week. California Governor Gavin Newsom said in mid-July students across most of the state won’t be able to attend school in person this fall, with Los Angeles schools offering only remote learning to start the year.

“Nothing is more important than the health and safety of our students and staff, and Chicago Public Schools won’t open its doors on Sept. 8 if public health officials don’t deem it safe to do so,” Emily Bolton, a spokesperson for the Chicago Public Schools, said in an email on Tuesday. “We continue to gather community feedback and closely monitor the public health data before making any final determinations for what learning will look like this fall.”