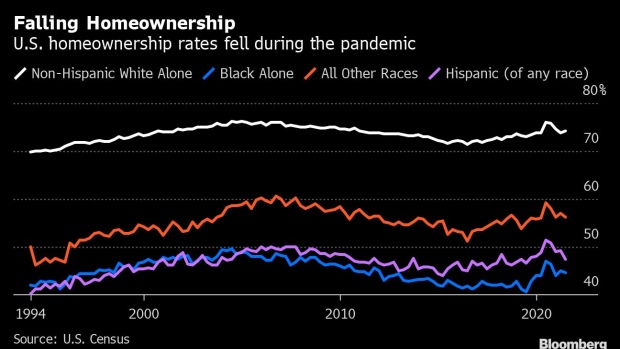 (Bloomberg) -- The Chicago City Council approved a measure on Tuesday to boost transparency around the lending practices of the city’s banks and help address home-ownership disparities in the nation’s third most-populous city.

The “Lending Equity Ordinance” will publicly share lending data and require an annual hearing on the information with the committee on finance, Alderman Harry Osterman, a chief sponsor, said on Twitter. The measure also collects data on home equity loans and reasons for denial of loans by the banks serving as municipal depositories for the city. Such banks held about $725.3 million of the city’s cash and certificates of deposit as of Dec. 31, according to Chicago’s annual comprehensive financial report.

“Transparency is needed to inform Chicagoans about the institutions where their public funds are being deposited,” according to the ordinance.

The measure publicizes data by Census tract such as home-loan amounts and interest rates that banks provide when they bid annually for the city’s business. Disclosures about consumer and commercial loans in the city are also required. In the past, the city’s finance department didn’t evaluate whether banks provided “inclusive and equitable financial services throughout Chicago” even though it collected data, according to an August report by the city’s inspector general.

Now that will change and banks’ lending practices may influence where the city deposits its funds, according to the ordinance.

The ordinance is “going to give us a better understanding of lending activity,” Alderman Scott Waguespack, head of the finance committee, said during the City Council meeting Tuesday. It will “hopefully break down some barriers,” he said.

Chicago is following cities with similar oversight like Pittsburgh and Cleveland. The move comes after recent reports showed lending practices have contributed to the city’s racial homeownership gap. Last year, local NPR affiliate WBEZ and the nonprofit newsroom City Bureau revealed that for every $1 banks loaned in Chicago’s White neighborhoods, 12 cents went into the city’s Black neighborhoods and 13 cents in Latino areas.

The gap in Chicago exemplifies the disparities across the country, which were only exacerbated during the pandemic. While U.S. White homeownership reached 74.2% in the second quarter of 2021, up from almost 70% in 1994, Black homeownership increased to 44.6% and the Hispanic level to 47.5% from under 42% for both in the same period, according to Census data.

Illinois bankers, however, have concerns about the new rules. The industry aims to improve mortgage access and address inequality in Chicago, particularly among Black and Latinx mortgage applicants, according to an emailed statement from the Illinois Bankers Association.

But “this ordinance creates more hurdles within an already daunting application process, which could further discourage small, community banks and minority-owned banks from applying and working with the city,” the statement said.