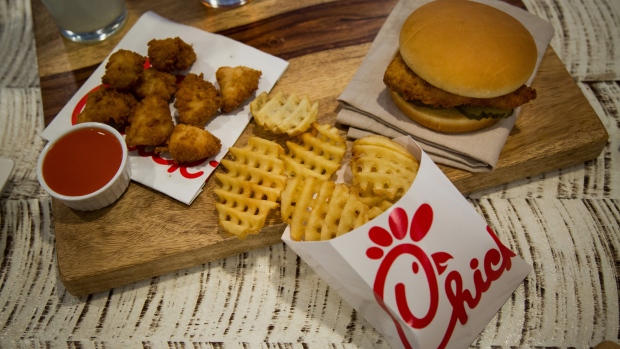 Chicken nuggets, french fries, and a fried chicken sandwich are arranged for a photograph during an event ahead of the grand opening for a Chick-fil-A restaurant in New York, U.S., on Friday, Oct. 2, 2015. , Michael Nagle/Bloomberg

Chick-fil-A, the largest U.S. chicken-restaurant chain, sued Tyson Foods Inc. and several other top American poultry producers, accusing them of illegally coordinating with one another to keep prices high.

The closely held Atlanta-based chain “purchased billions of dollars worth of broiler chicken” from defendants or co-conspirators “at prices that were artificially inflated,” according to the complaint filed Friday in U.S. District Court in Chicago.

Chick-fil-A is the latest to join in the years-long antitrust litigation accusing poultry companies of fixing prices beginning in 2008 and continuing for about a decade. Target Corp. filed also filed a lawsuit this month, joining others including grocer Fresh Market and convenience-store chain Wawa Inc.

Named in the latest complaint are the top three U.S. chicken makers -- Tyson, Pilgrim’s Pride Corp. and Sanderson Farms Inc. -- as well as others. The complaint says the poultry companies communicated through phone calls and text messages to share confidential bidding and pricing information with one another. Agri Stats, once a subsidiary of Eli Lilly & Co. that provides poultry-industry data, is also named as a defendant.

A Tyson representative on Sunday said the claims were unfounded and that “we will continue to vigorously defend our company.” Sanderson declined to comment, and Pilgrim’s Pride didn’t immediately respond to requests for comment outside regular business hours.

--With assistance from David Yaffe-Bellany.