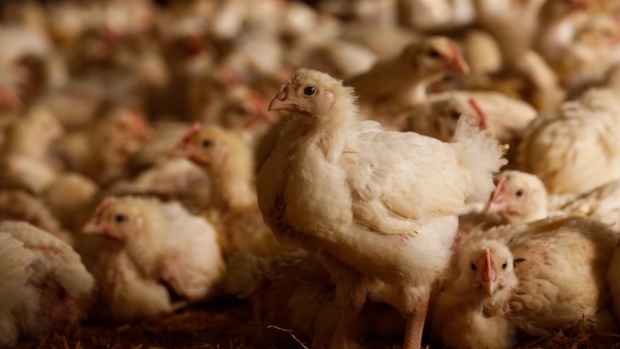 Freerange chicken poults huddle together in a hen house in the U.K. , Bloomberg

As the Trump administration touts progress on a deal with China to reshape the trading relationship, Beijing is said to be requesting a compromise over poultry.

China is asking to ship products made from its chicken to the U.S. in return for reopening its market for American poultry after four years, according to a person with knowledge of the U.S. position in the talks. Feet, wings and legs are on the table amid intense trade talks between the two countries that could result in a deal as early as March, the person said, asking not to be identified because negotiations are private.

The U.S. is asking Beijing to make substantial reforms on poultry to address longstanding concerns, the person said, adding that there is optimism about the discussions on the matter.

Talks about poultry have come to light recently while soybeans had appeared to be front and center for the last few months. On Feb. 23, U.S. Agriculture Secretary Sonny Perdue confirmed that poultry is among the commodities such as beef, rice, corn, ethanol and sorghum under discussion.

For poultry, the U.S. wants China to lift the nationwide ban and limit future restrictions to the region around an infected area, the person said. China prohibited U.S. poultry in 2015 due to an outbreak of highly pathogenic avian influenza. Nearly all other nationwide bans following the outbreak have been lifted. 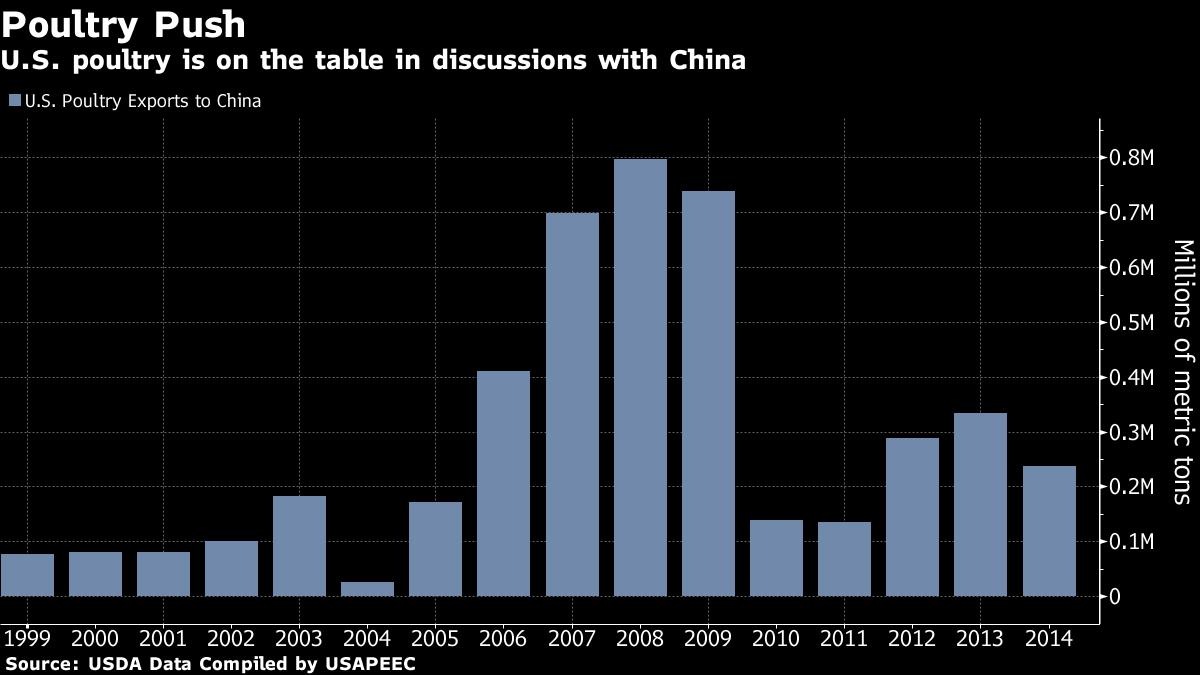 The USDA referred requests for comment to the Trade Representative’s office, which didn’t immediately respond. The Chinese Ministry of Commerce didn’t respond to a faxed request for comment.

China’s aim to ship cooked chicken to the U.S. dates back to 2004, but the proposal has critics. The country is currently allowed to ship poultry to the U.S. that is slaughtered in America or certain other countries. Now, as part of the negotiations, the country is asking for approval to cook its own chickens and export them to the U.S., according to the person.

Even before the ban, U.S. exports to China had slid after the Asian country placed duties on American poultry in 2010. The duties were lifted a year ago but the ban remained intact. The market peaked at almost US$722 million in 2008 and slipped to about US$315 million in 2014, the year before the ban.

As part of the trade talks, China has offered to make total purchases from the U.S. worth $1.2 trillion over six years. As much as $30 billion of that total might come from agricultural commodities, Bloomberg News reported last week.