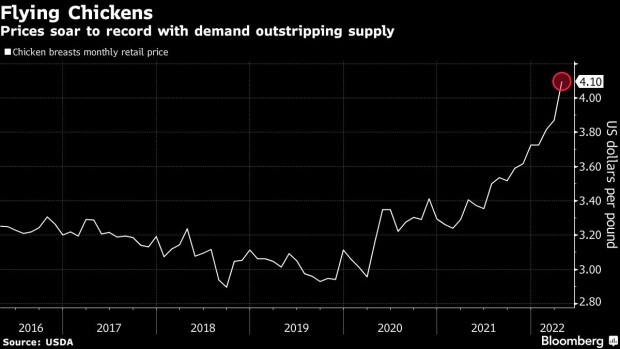 Chickens roam free outside a barn at a farm in Pleasureville, Kentucky, U.S., on Wednesday, Jan. 8, 2020. Congress had authorized additional borrowing authority for the U.S. Department of Agriculture in coronavirus-relief legislation passed earlier this year, and the second round has been widely anticipated. Photographer: Luke Sharrett/Bloomberg , Bloomberg

The third-biggest US chicken producer reported its highest earnings per share ever as easing worries about the coronavirus contributed to “significantly improved demand from food service customers,” the company said in a securities filing. The company is being acquired by Cargill Inc. and Continental Grain Co., which is expected to be completed in the first half of this year.

Sanderson said the average selling price for its chicken was about 34% higher than a year ago while costs for feed were up just 14%. “This strong demand for chicken has coincided with constraints on the supply side,” it said.

The highly consolidated meat sector has been criticized by politicians in Washington for turning big profits even as consumers pay higher prices and farmers complain about missing out. The Biden administration Thursday unveiled a proposed rule that would overhaul chicken farming by forcing meat producers to disclose information on how pay is determined for the contract growers who raise the birds.

Under the deal with Cargill and Continental, Sanderson will be combined with chicken producer Wayne Farms. The tie-up values Laurel, Mississippi-based Sanderson at $4.53 billion or $203 a share. Shares on Friday climbed as much as 3.6% to a record of $201.50.