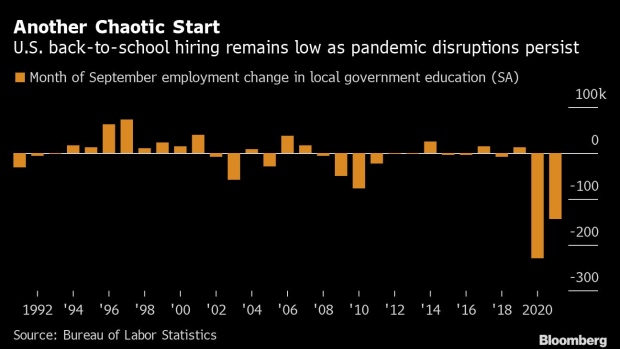 (Bloomberg) -- School may be in session, but the dearth of child care is still proving to be a major hurdle to women reentering the U.S. labor market.

The number of women on payrolls last month fell for the first time since the winter coronavirus surge in December 2020, and the drop was even more pronounced for those age 25 to 44, who are more likely to have to school-age children. The decline was a major driver behind a slowdown in overall job growth in the country.

The jobs report released Friday came as a surprise because many anticipated that the return to school would alleviate the child-care burden, which mostly falls on mothers. The data suggest that uncertainty around the coronavirus delta variant, which has led to quarantines and a partial return to virtual learning in some cases, will continue to keep parents from seeking a job.

“Child-care issues are far from resolved,” said Sarah House, senior economist at Wells Fargo & Co., whose own child is home serving a two-week quarantine. “Parents, particularly women, are slow to return to the workforce.”

Watch: How This Recession Could Set Us Back 30 years

For younger children, many daycare centers have remained closed or lack staff, providing even fewer options for working parents.

The percentage of female workers over 20 who were employed or looking for work dropped to the lowest since February. Another factor of the nationwide shortfall in job growth was adult Black men leaving the labor market: Their participation rate also fell to the lowest in seven months -- while White and Hispanic men’s participation increased.

White, Black and Hispanic women all saw declines in participation rates. Because fewer women were in the labor force, their rate of unemployment declined. However, the jobless rate remains much higher for Black and Hispanic women —  who disproportionately work in health care, hospitality and education, and whose communities were hard hit by the virus.

“When it comes to the conflation of two big trends that would depress participation, Black and Hispanic women stand at the intersection,” said Nela Richardson, chief economist at ADP Research Institute.

The September numbers also reflect deeper changes in the job market, with many reassessing their career and work-life balance.

“Women are also clearly taking a second look at the role of work in their lives, including what they expect from employers and the flexibility they need in the workplace,” C. Nicole Mason, chief executive officer of the Institute for Women’s Policy Research, said in a statement. “It will take time to see how women navigate what is hopefully a waning pandemic and what that means for their jobs and careers.”

The number of Covid-19 cases among those under 18 rose by nearly 1 million last month as many schools reopened amid a lack of vaccines for youth and mixed mask wearing.

There’s a silver lining ahead. A vaccine for kids 5 to 11 may be available in the coming weeks after Pfizer Inc. and BioNTech SE submitted an application to U.S. regulators this week.

Coupled with an expected decline in the number of cases, economists anticipate more women to reenter the workforce. But time on the sidelines, especially for older women, can have an impact, said Daniel Zhao, senior economist at Glassdoor Inc.

“The longer women are out of the workforce, whether because of child-care needs or other reasons, the harder it is to get them back in,” Zhao said.