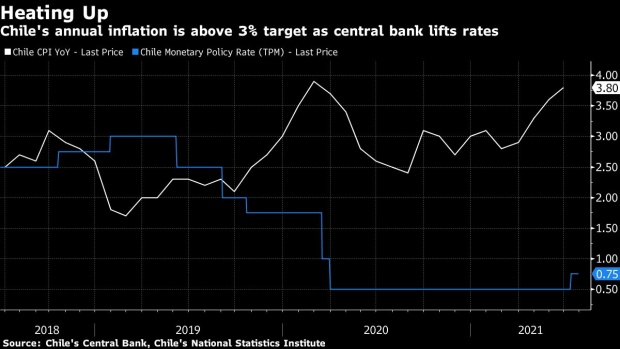 Trends in the labor and credit markets need to be better understood, policy makers wrote in the minutes to their July rate-setting meeting published on Friday. In that context, the interest rate will remain below neutral over “the complete” two-year policy horizon, bank board members wrote.

“Several board members highlighted that at the time of the meeting, market prices had tended to internalize a process of monetary policy adjustment faster than was considered appropriate,” they wrote. The bank lifted borrowing costs to 0.75% this month after holding them steady at a record low for over a year.

Chile’s central bank is paring back stimulus as activity leaps and inflation runs above the 3% target. The government is pumping billions of dollars into the economy through cash transfers and subsidies. Meanwhile, coronavirus cases have plunged, prompting officials to loosen rules affecting everything from international travel to the number of people in stores and restaurants.

Annual inflation reached 3.8% in June mainly due to fuel prices, according to the minutes. In contrast, food costs now represent less of a driver to cost of living increases.

Pockets of weakness as well as a significant degree of uncertainty remain in Chile’s economy, policy makers wrote in the minutes. In that context, stimulus is still needed, though with lesser intensity than before, they wrote.

Recent indicators show that consumption and retail are driving the country’s economic rebound. In-store sales in the Santiago metropolitan region surged 65% year-on-year in June, according to the National Chamber of Commerce.

Indeed, more Chileans are venturing out as the pandemic recedes. Test positivity levels are around 2%, the lowest on record, while the seven-day rolling average for cases has plunged to 1,300 from over 7,300 in early June.

The central bank expects gross domestic product to expand 8.5%-9.5% this year, while annual inflation reaches 4.4% in December, according to forecasts published last month.