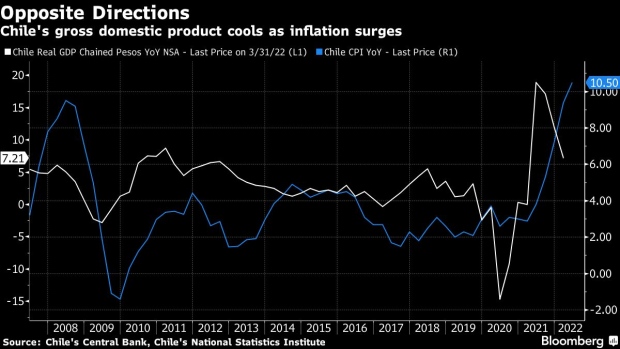 (Bloomberg) -- Chile’s central bank slowed the pace of monetary tightening for the second consecutive meeting and said it would lower the magnitude of hikes ahead to bring inflation back to target.

The bank board, led by Rosanna Costa, lifted the overnight rate by 75 basis points to 9% Tuesday, as forecast by nine of 15 economists in a Bloomberg survey. Six other analysts projected a hike of a full percentage point. Policy makers have now raised borrowing costs by a total of 850 basis points since July.

With the information it has at hand, “the board estimates that in order to ensure the convergence of inflation to 3% over a two-year horizon, additional adjustments of lesser magnitude in the monetary policy rate will be necessary,” the bank said in a statement.

The central bank’s balancing act on rates is becoming more precarious as prices rise at the fastest pace in almost three decades, even as the economy contracted in the first quarter. The national statistics institute will probably report on Wednesday that inflation accelerated further in May, complicating matters for the central bank, known as BCCh, yet more.

A hike of 75 basis points indicates “a still-hawkish stance,” economists at Barclays Plc wrote in a report before the decision. But at the same time, it shows “the BCCh’s concerns about growth by reducing the pace from 125bp at the previous meeting.”

The government is taking steps to reduce the impact of inflation on consumers. In recent weeks, President Gabriel Boric’s administration introduced plans to double the amount of resources diverted to a fuel price stabilization fund known as Mepco, while boosting funding for the poor.

Consumer prices likely rose 11.4% in May from a year prior, according to economists surveyed by Bloomberg, almost quadruple the 3% inflation target.

Economic activity fell in April as drops in mining and industry overshadowed an increase in commerce. Companies are delaying expenditures as the country writes a new constitution, which will be put to a referendum on Sept. 4.

(Updates with quote from statement in third paragraph.)