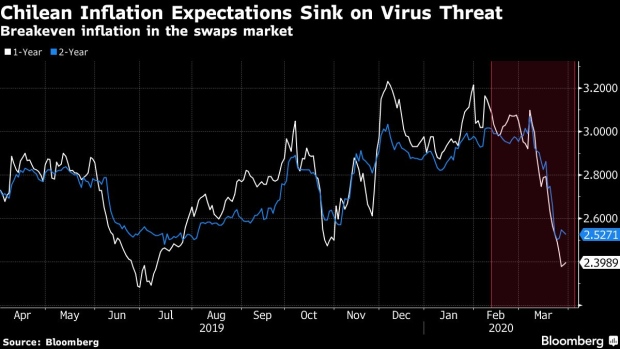 The silhouettes of shoppers are seen purchasing food at a stand in Santiago, Chile, on Saturday, Oct. 15, 2016. Chile's central bank will probably keep its benchmark rate at 3.5 percent for a 10th straight meeting as inflation slows to within policy makers' target range amid tepid economic growth. Photographer: Luis Enrique Ascui/Bloomberg , Bloomberg

(Bloomberg) -- Chile’s central bank cut borrowing costs for the second time this month as the coronavirus pandemic threatened to bring on the deepest slump since the 1980s.

Policy makers lowered the key rate to 0.5% from 1%, expanded a bank-bond purchase program by $4 billion and extended it to all maturities, according to a statement Tuesday. Twelve of 15 economists surveyed by Bloomberg forecast a half-point cut, one expected a 75 basis-point reduction, while two expected the rate to be kept unchanged.

Central banks around the world are expanding monetary stimulus to curb the damage from the virus that’s hit consumer spending, international trade and travel. Chile is particularly vulnerable following a slump in the price of its biggest export, copper, at a time when the economy was already reeling from a wave of civil unrest last year.

“Inflationary pressures in the medium term have fallen substantially and overcoming the health crisis will have an important effect on activity and employment,” the central bank said in its statement. “Convergence to the 3% inflation target will require monetary policy to remain in this highly expansive level for a long time.”

The central bank slashed its benchmark rate by three-quarters of a percentage point at an emergency meeting on March 16, the biggest reduction since 2009, citing a rapid deterioration in the global outlook. The current 0.5% rate matches the record low reached in the aftermath of the financial crisis.

Goldman Sachs Group Inc. expects Chile’s economy to contract 3% this year, the worst performance since the 1980s, according to a report published March 27.

“The central bank isn’t saving any ammo for later, but I think that is what the economy needs right now,” said Nathan Pincheira, an economist at Fynsa. Extra liquidity measures are also “very positive and needed for the rate cut to actually have an effect.”