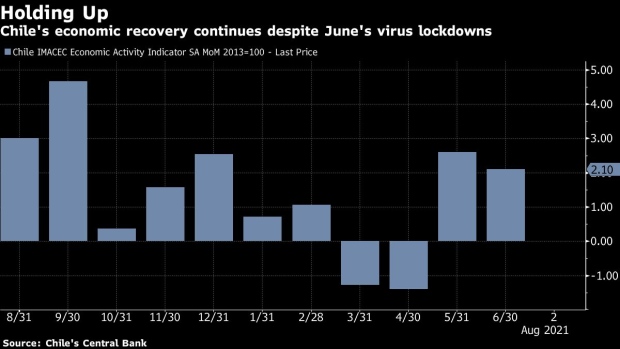 (Bloomberg) -- Chile’s economic activity rose more than expected in June as families and businesses rode out fresh lockdowns caused by a coronavirus surge.

The Imacec index, which is a proxy for gross domestic product, rose 2.1% from the month prior, more than the 0.6% median estimate in a Bloomberg survey. Activity leaped 20.1% from a year ago, the central bank reported on Monday.

Early June marked a virus peak for Chile, one of Latin America’s richest economies, which had cities including Santiago under strict limits on movement and commerce. Since then infections have tumbled, while demand has gotten a boost from billions of dollars in government stimulus and early pension withdrawals. Still, the recovery is uneven and job creation remains weak.