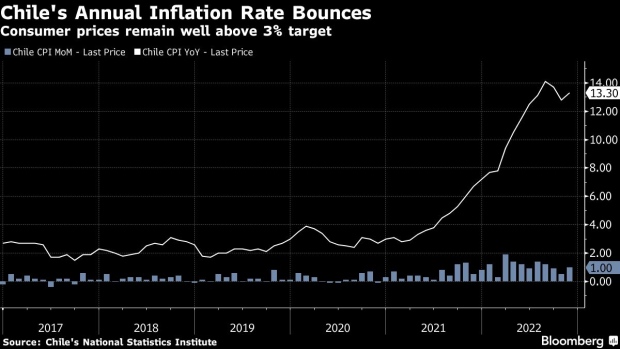 (Bloomberg) -- Chile’s inflation surged more than expected and the central bank raised its consumer price forecast for this year and next, one day after policy makers reaffirmed plans to hold the interest rate at the highest level in more than two decades. Swap rates soared.

Annual inflation sped up to 13.3% in November, above all estimates in a Bloomberg survey that had a 12.9% median forecast. In the month, consumer prices rose 1%, the national statistics institute reported on Wednesday, twice the pace forecast.

Chile’s central bank held its key rate at 11.25% on Tuesday after 11 straight hikes as annual inflation runs well above the 3% target. After two consecutive months of slower-than-expected price increases, November’s figures will come as a blow to policy makers. Some economists say lingering liquidity from last year’s stimulus continues as a price threat.

Swap rates leaped across the curve, with the two-year jumping 56 basis points to 7.60%, its biggest gain since February.

Food and non-alcoholic beverage costs jumped 1.7% in November, while transportation gained 1.3%, according to the statistics institute. On the other hand, communications fell 2.1%, while recreation and culture declined 1.4%.

“The data showed the decline may not be as fast as the central bank and many analysts expect, and risks are still biased to the upside. The surprisingly high print may limit room for inflation expectations to extend their recent downtrend. It may also push back forecasts for the central bank’s initial rate cut.”

In a separate report on Wednesday, Chile’s central bank raised its year-end inflation forecasts for this year and next to 12.3% and 3.6%, respectively, from 12% and 3.3%. Their price estimate for the end of 2024 remained at 3%.

Chile’s gross domestic product will expand 2.4% this year before contracting between 0.75% and 1.75% in 2023, according to the monetary authority.

Inflation remains very high, and its decline to target is “still subject to risks,” the central bank board wrote in a statement accompanying Tuesday’s rate decision. Board members added that “significant” adjustments have been made to monetary policy.

Annual inflation will end the year near 12% before hitting single digits by April, Finance Minister Mario Marcel said at an event in November. He said Chile is starting to see the “light at the end of the tunnel” on consumer prices.

--With assistance from Giovanna Serafim and Rafael Gayol.