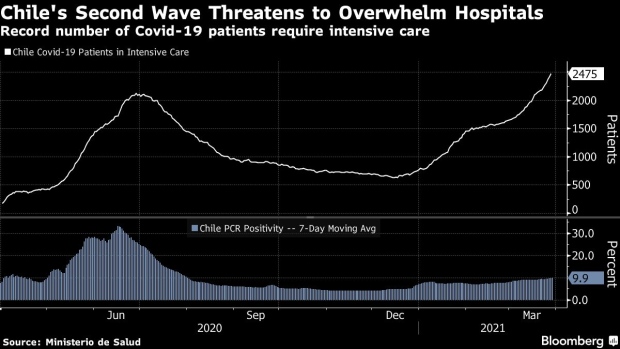 (Bloomberg) -- Chile’s central bank held its benchmark interest rate at a record low as tighter lockdowns and an unprecedented surge in virus cases reinforce the need for stimulus in one of Latin America’s richest nations.

In a unanimous decision, the bank’s board, led by its President Mario Marcel, kept the overnight rate at 0.5% for the eighth straight meeting on Tuesday. The decision was expected by all 14 analysts surveyed by Bloomberg.

The rate “will remain at its minimum of 0.5% until the economic recovery takes hold and spreads to the most lagging areas of spending, which will still take several quarters.”

Chile is holding borrowing costs steady even as rising commodity prices and global stimulus prompt some emerging markets to start tightening monetary policy. Earlier this month, Brazil raised rates by the most in a decade, while Russia and Turkey followed by lifting their borrowing costs.

The entire capital city of Santiago, as well as regional population centers such as Valparaiso and Concepcion, are now under strict limits on movement and commerce in an effort to slow the pandemic’s spread. That means a stronger economic growth won’t come until the second half of the year, Finance Minister Rodrigo Cerda said on March 19.

Despite the jump in virus cases, over a third of the population has already received at least one Covid vaccine dose in one of the world’s fastest roll-outs.

Annual inflation eased to 2.8% in February, below the central bank’s 3% target, as food prices fell on the month. Still, traders’ short-term price forecasts are on the rise, and Goldman Sachs is predicting that cost of living increases will reach 3.5% by December.

(Updates in third paragraph with quote from statement)