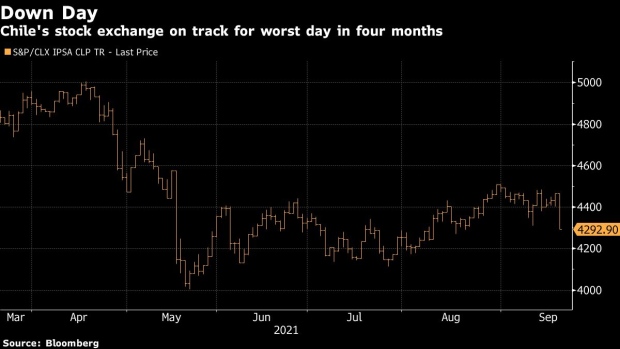 (Bloomberg) -- Chile’s government plans to remove a series of tax exemptions, including one on securities trading, to help finance an increase in pensions for the poor.

The pension reform, which will cost the government about $1.1 billion a year, was presented to Congress Monday for immediate discussion, President Sebastian Pinera said in a video address posted on his Twitter account.

The tax changes include the imposition of capital gains tax on trading in liquid securities, 20 years after it was removed, as well as other levies on the construction industry and inheritances. The light touch approach to taxes explains part of the growth of the local capital market. The market value of Chile’s stock market is about 70% of the country’s GDP, compared to 68% for Brazil and 32% for Mexico, according to World Bank data.

Chilean stocks extended losses after the announcement, with the benchmark S&P IPSA index down 3.9%, on track for its worst daily performance in four months.

The pension bill was presented in the same week that a commission in the lower house is scheduled to discuss a fourth round of early pension withdrawals. The government is seeking to weaken support for the latest drawdown, which already faces stiff opposition in the Senate.

The three previous withdrawals, which allowed Chileans to tap their pension savings to counter the effect of the pandemic, led to about $49 billion being injected into the economy, now with signs of overheating. They have proven popular and legislators have been scared of opposing them just a few months before elections.

The bill presented today will increase a basic solidarity pension to about 178,000 pesos ($230) and will also extend coverage to about 80% of the population, Pinera said.