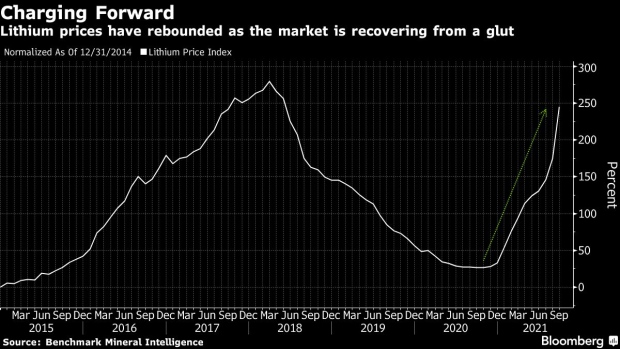 (Bloomberg) -- Chile is offering new contracts to tap the world’s biggest reserves of lithium in a effort to reclaim market share as demand for the battery metal surges.

The government is making bidding rules available to local and foreign firms for five quotas of 80,000 metric tons apiece. Winners will get seven years to explore and develop projects and 20 years of production. The state will charge a royalty for the allocation of quotas and variable payments during production.

Read More: Lithium Miners Are Going to Compete for Biggest Lode in Americas

The South American nation has been losing market share as new frontiers open up ahead of an expected quadrupling of demand for the key ingredient in rechargeable batteries. The two incumbents in the giant Atacama salt flat, SQM and Albemarle Corp., are expanding, but Chilean authorities are looking to accelerate supply growth by opening up other new areas.

Automakers and battery manufacturers are seeking to shore up supplies of commodities seen as critical to the development of electric cars, with lithium carbonate prices in China reaching record highs. Confidence is growing that the market is finally shaking off a glut that dragged down prices in 2018.

“The increase in global lithium demand and the challenge to promote new technologies to help fight climate change and transition to cleaner energy represents an opportunity to boost Chile’s lithium industry and strengthen its strategic position, benefiting the country and its people,” the mining ministry said Wednesday in a statement.

While Australia is the largest supplier of lithium, Chile boasts the most reserves worldwide by a large margin.