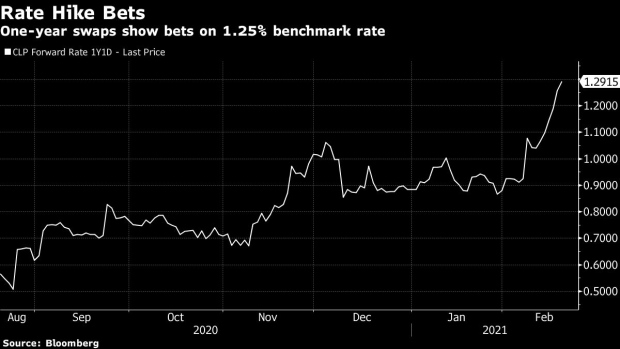 SANTIAGO, CHILE - DECEMBER 24: In this handout picture provided by the Health Ministry of Chile nurse receives the vaccine as Health Minister Enrique Paris (R), Public Health Subsecretary Paula Daza (C) and Subsecretary of Assistance Networks Roberto Dougnac stand by as part of Chile's COVID-19 vaccination plan on at Hospital Metropolitano December 24, 2020 in Santiago, Chile. After receiving this morning from Belgium the first batch of 10,000 doses of Pfizer/BioNTech vaccine Chileans are vaccinating the health personnel of La Araucanía, Biobío and Magallanes, some of the most affected regions, and a part of the metropolitan area. During the next threee months President Sebastián Piñera plans to vaccinate 5,000,000 among risk groups. (Photo by David Lillo/Ministerio de Salud de Chile via Getty Images) , Photographer: Handout/Getty Images South America

(Bloomberg) -- For old emerging-market hands, the sudden jump in the Chilean peso has a facile explanation on first blush: surging copper prices.

And this is certainly part of the story, but there’s a much bigger phenomenon that’s supporting the rally. The government’s vaccination campaign is rapidly gaining speed, stoking expectations that the economy will boom later in the year and interest rates will start to climb.

In a region that has been decimated by the pandemic and has made precious little headway in vaccination efforts, Chile stands as a clear outlier. With 15 doses administered per 100 people, the country has achieved a rate that is multiples of its closest Latin American peers -- Brazil and Costa Rica -- and higher than that of all but eight nations in the world, according to Bloomberg’s vaccine tracker.

The government has been easing mobility restrictions and increasing direct transfers to the poor to help fuel growth, leading Banco Santander SA and Moody’s Investors Service to boost their forecasts for expansion this year to the fastest in a decade. Chile is being swept up in a global phenomenon in which traders are rewarding the vaccine roll-out leaders -- namely Israel, the U.K. and U.S. -- on the premise that defeating the virus is a first step toward a resurgence in growth.

“Chile has been able to strongly stand out from the rest of the region with a faster vaccination process which will make it come out of the crisis sooner, while others suffer delays,” said Alejandro Cuadrado, a currency strategist at Banco Bilbao Vizcaya Argentaria SA in New York.

The peso strengthened 2% last week to 707.95 per dollar amid its longest winning streak since 2010. Much of the enthusiasm is driven by bets on higher interest rates luring flows to the local bond market.

Swaps traders are now pricing in a 25 basis point rate hike to 0.75% as soon as August, followed by an additional 50 basis points over the next six months. Economists are only slightly less hawkish, with five among the 12 surveyed by Bloomberg calling for the central bank to raise rates by the end of the year.

Chile’s goal is to achieve herd immunization against Covid-19 in the first half of the year, a target that’s far ahead of its peers. Brazil was late to start and just a month later nine capital cities have suspended immunizations after shots ran out. Mexico’s drive slowed amid a pause in shipments and Colombia only kicked off its campaign a few days ago.

Chile bested its neighbors in the vaccination race by moving aggressively to secure its supply from multiple providers, taking advantage of early access to the Sinovac jab and eventually signing contracts for enough shots to cover its entire population. The country also had a well established method for delivering vaccines, meaning the logistics for administering the doses was already in place.

“Chile is motoring ahead in Latin America’s vaccine race,” said Nikhil Sanghani, an analyst at Capital Economics. “Policy makers at a national and regional level had a clear plan to transport jabs to local distribution centers, and this is being carried out effectively.”

The fast pace of vaccination led firms including Moody’s and Santander to boost their growth forecasts for this year to above 5.5%. That would be among the fastest in Latin America, according to Bloomberg surveys.

Of course there are risks. At some point, other countries in the region are likely to catch up on vaccines, eroding Chile’s advantage. Analysts also expect this year’s presidential and congressional elections, as well as a rewrite of the constitution, to weigh on investor confidence and economic activity.

“The market will keep an eye out on the constitutional reform process,” said Juan Prada, a currency strategist at Barclays Plc in New York. He expects two rate hikes in the fourth quarter of 25 basis points each.

Those forecasts for interest-rate increases makes Chile stand out from most of the world, where the idea of raising borrowing costs is taboo amid all-out efforts to stimulate growth. Brazil is another exception, but traders there are increasing bets on higher rates not because of a revival in economic growth, but because inflation is picking up due to a surge in government spending.

Caio Megale, an economist at XP Investments in Sao Paulo, said that as herd immunity takes hold Chile will be one of the first economies in the region to rebound to pre-pandemic levels.

“The vaccination campaign started very strongly,” he wrote in a note. “Chile will be one of the best performing economies in the region in 2021.”