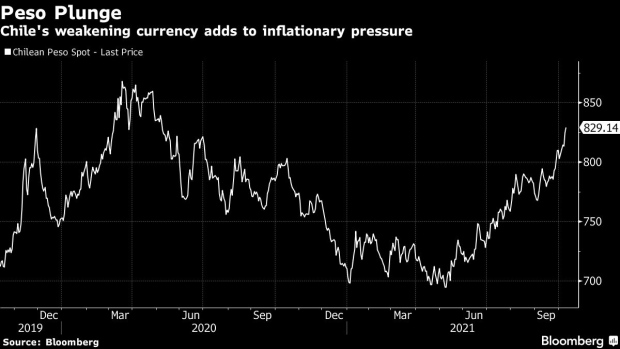 (Bloomberg) -- Chile’s central bank will likely speed up the pace of interest rate increases as inflation soars and lawmakers weigh even more stimulus for one of the world’s fastest growing economies.

The bank will raise its overnight rate by a full percentage point to 2.5% on Wednesday, according to eight of 14 economists in a Bloomberg survey. Five others expect a second straight hike of 75 basis points, while one is betting on a increase of 150 basis points.

Policy makers led by Mario Marcel are grappling with a rapidly worsening inflation outlook in one of the region’s richest nations. Consumer prices leaped by the most since 2008 in September on broad-based pressures, outstripping all analyst forecasts. At the same time, congress is debating new pension withdrawals that would pump as much as $20 billion into an economy already projected to grow near 11.5% this year.

“Inflation through September added evidence of more broad and significant price pressures that, along with the higher-than-expected headline, are likely to push up already high expectations. Data support higher interest rates. We expect the central bank to increase the benchmark rate by 150 basis points to 3.0%.”

Wednesday’s decision will be published on the central bank’s website at 6:00 p.m. in Santiago, together with a statement from the bank’s board. Here’s what financial markets will be focusing on:

Investors want to know what the central bank makes of September’s larger-than-expected consumer-price jump and how much longer the surge will last.

Policy makers see annual inflation reaching 5.7% in December, well above the 3% target, according to their most recent projections published on Sept. 1. Still, some economists are warning the latest price figures point to an even higher year-end reading.

Indeed, Chile is facing a barrage of pressures including global supply restraints, a weaker currency and strong demand from government stimulus, according to Andres Pardo, chief Latin America macro strategist at XP Inc.

Since the central bank’s last rate-setting meeting in August, Chile’s congress has advanced a proposal for a fourth round of early pension withdrawals that, if approved, would pump as much as $20 billion into an already red-hot economy, according to the Finance Ministry.

The bill is captivating investors’ attention, both due to its potential macroeconomic impact as well as repercussions for the broader financial system. Analysts will pay close attention to what the central bank has to say about the proposal and how it may help shape monetary policy going forward.

Considering both growth and inflation trends, many investors expect the central bank to chart a course for steeper key rate increases. Until now, policy makers have signaled that borrowing costs will rise to a neutral level next year. There’s speculation that time-line will be brought forward.

Indeed, the central bank would benefit from further “front-loading” borrowing cost hikes, according to a note from Goldman Sachs Group Inc. economists including Alberto Ramos. “Any perceived hesitation by the central bank could ultimately jeopardize its ability to shape expectations,” they wrote.