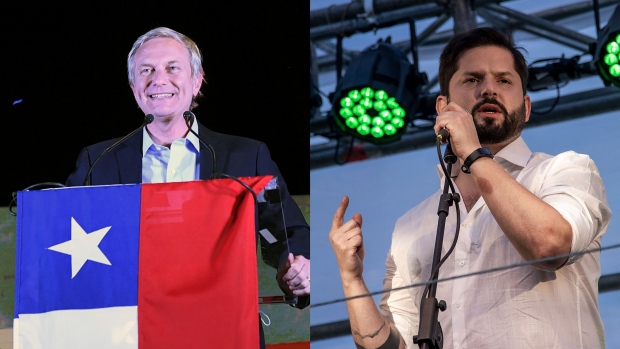 Boric got 40% of voter intentions, up slightly from 39% in a Nov. 28 poll, according to a Cadem public opinion survey published late on Friday. Conservative rival Jose Antonio Kast followed with 35%, up from 33% previously, while 25% of respondents said they were undecided.

Boric and Kast will face off in a Dec. 19 runoff vote that will determine the future of free-market economic policies in one of Latin America’s richest nations. Both candidates have risen amid smoldering social unrest that has prompted voters to turn their backs on traditional parties. Uncertainty is also running high as Chile simultaneously drafts a new constitution.

Kast, 55, pledges to lower taxes, slash public spending and grant a bigger role to the private sector. Socially, he backs a hard-line approach to illegal immigration and crime and opposes both abortion and same-sex marriage.

By contrast, Boric, who is 20 years his junior, wants the rich to pay more taxes with the goal of funding better public services and reducing inequality. He supports more rights for groups including women and the indigenous.

Both contenders continue to jockey for endorsements in the final stretch before the runoff. They are scheduled to join economist Franco Parisi, who placed third in the first round vote, in his live broadcast over social media.