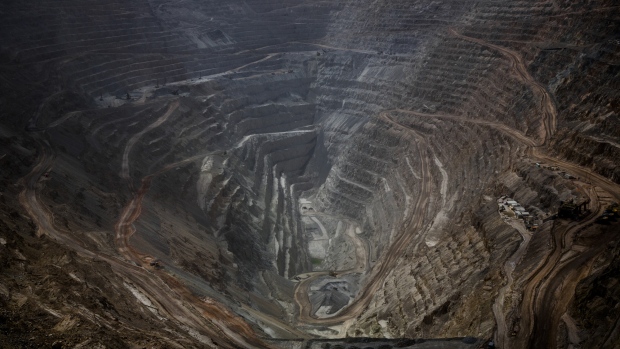 Codelco’s standing as the world’s top copper producer is increasingly at risk in the wake of a citizen uprising that is shaking Chile to its core.

Codelco planned to spend US$20 billion over a decade to modernize its aging mines and hold off a looming production slump. But protests that have sent millions into the street to demand changes in everything from pensions and health care to education could jeopardize the state-owned miner’s push for needed government funding.

The alternatives are largely unappealing. The company could delay the work, but its costs for processing lower-quality ore from aging mines is growing. It could boost borrowing, but its debt already sits at a record high. The bottom line: Without government funding, the company that now produces about 8 per cent of global copper may soon find itself slipping from its top spot, according to Colin Hamilton at BMO Capital Markets.

“Targeting flat production is optimistic,” said Hamilton, who is BMO’s managing director of commodities research. “Codelco might not be the world’s largest copper miner in three to four years. Short term, there are other priorities for the government.”

Codelco, or more formally Corporacion Nacional del Cobre de Chile, reports third-quarter earnings at the end of this week, when it’s expected to face new questioning about its upgrade plans in light of the protests.

“Codelco’s debt is already quite high,” Hamilton said by telephone. “So it’s very likely they’ll have to see some deference to the spending.”

President Sebastian Pinera’s center-right government earlier this year said talks on Codelco’s funding would start as soon as Congress passed a tax reform bill. But since the protests began on Oct. 18, bringing violence to the streets, there’s been no further discussion on Codelco’s needs.

The tax reform has been cast aside, and the government is now pledging to invest US$1.5 billion a year in social projects for the population at large.

The government’s fiscal situation is “extremely complex,” Finance Minister Ignacio Briones said in comments before the congressional budget commission on Tuesday, according to Diario Financiero. Boosting public investment by 7.8 per cent limits the amount of resources that can be deployed elsewhere, he said.

A Codelco official declined to comment. Officials from Chile’s Mining and Finance ministries did not respond to requests for comment.

Codelco’s annual production has remained roughly unchanged for the past few years. But while the company has been able to maintain its output, the ore it’s extracting from its aging mines is increasingly lower quality, boosting the company’s costs to process it.

In 2018, Codelco reported 1.81 million tons of output from its own mines, and from stakes it owns in other mines. Close behind is Melbourne-based BHP Group with 1.69 million tons for the fiscal year ended on June 2019.

Mostly, the plan for Codelco’s upgrades is to dig deeper, or to plumb parts of Codelco’s mines that haven’t been dug into before. But it also involves the added use of pricey modern equipment and new techniques that are expected to help revive mines that, in some cases, are a century old.

Without access to government funds to handle this work, the company’s debt could soar to US$21 billion from already record-high levels, former Chief Executive Officer Nelson Pizarro said earlier this year. 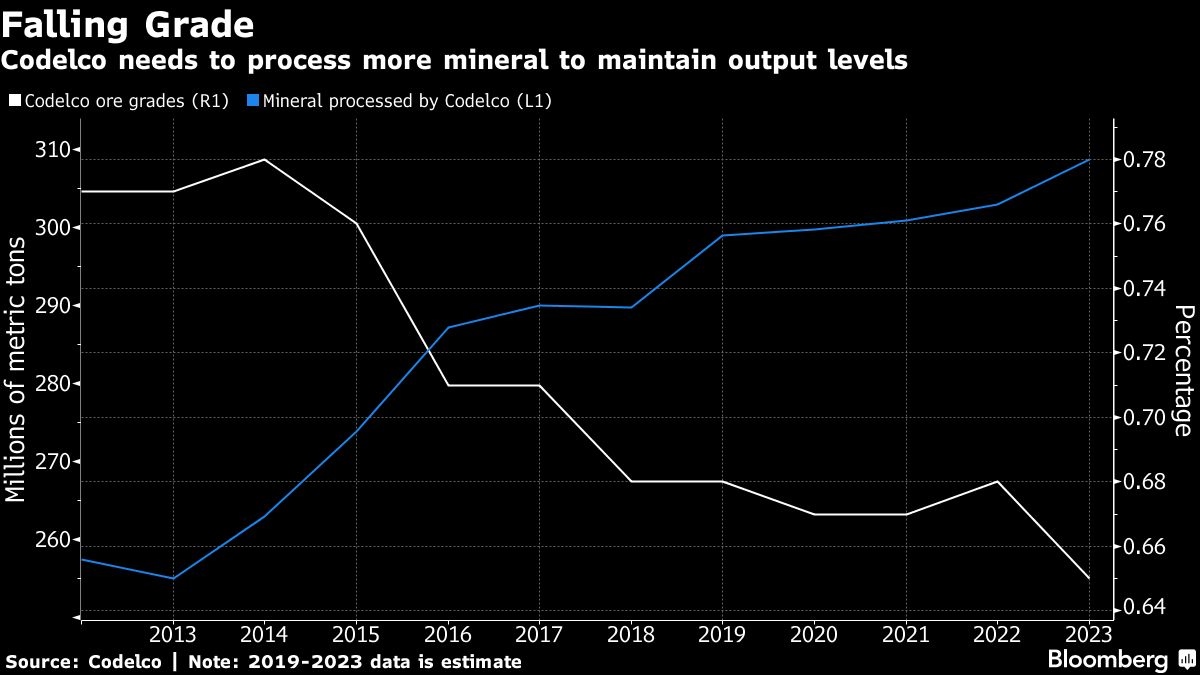 Chilean bonds have widened 31 basis points on average, the most in emerging-market investment grade.

Codelco will probably make the final investments needed to complete the expansion of its Chuquicamata mine, which has taken the giant open pit operation in northern Chile underground, according to Hamilton. But there are questions on whether it will maintain the time line of expansions at El Teniente, its largest mine, and the Andina mine, he said.

If El Teniente is delayed, annual output for the company could fall to 1.5 million tons per year, Hamilton said.

Another option would be to issue more bonds. The company’s total debt reached a record high of US$16.1 billion in the second quarter of the year, according to data compiled by Bloomberg. Codelco sold bonds worth a combined US$180 million in August and US$2 billion in September. Earlier this month it issued HKUS$500 million (US$64 million) in debt.

At a mining conference in London this week, Chile’s unrest drew a sharp comment from billionaire investor Robert Friedland, who referred to the South American country as “terrible place to invest in mining,“ and said the Congo offered more potential.

While Chile seeks measures to quell the social unrest that exploded last month, the election of President Felix Tshisekedi in the Congo earlier this year has improved prospects in that country, Friedland said at the Mines and Money conference on Monday.

His statement drew the ire of the Chilean government, which touted the South American nation’s track record. “The person who expresses this opinion doesn’t know Chile,” Mining Minister Baldo Prokurica said in a voice mail. “Chile has a long history of a stable mining investment climate and one month of complex issues can’t erase that.”

For now, Chile has fiscal space to increase spending on social programs without diverting funds from Codelco or asking the company for a higher dividend, said Guido Chamorro, the co-head of emerging-market hard currency debt at Pictet in London, which holds Codelco bonds.

There is no present need, he said, “to ask Codelco for additional dividends to raise funding. For now it’s still much cheaper to Chile to borrow itself directly.”