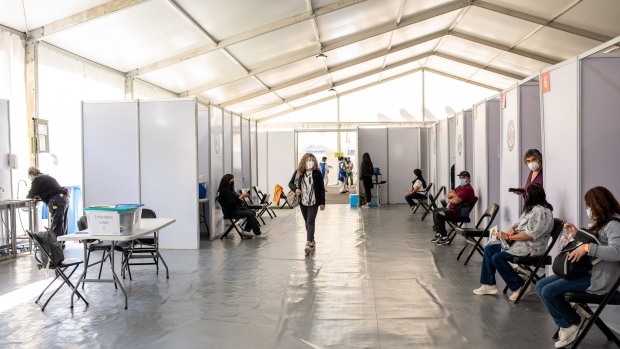 A healthcare worker administers a dose of the Sinovac Biotech Ltd.'s CoronaVac Covid-19 vaccine at a temporary clinic inside the Bicentenario Stadium in Santiago, Chile, on Monday, March 29, 2021. Chile has been vaccinating its population much faster than all other countries in Latin America, with more than 6 million inoculated, though the nation has still seen its daily record number of cases increase. Photographer: Cristobal Olivares/Bloomberg , Bloomberg

(Bloomberg) -- Chile will start to vaccinate residents with a third dose against coronavirus next week in a campaign that mixes shots from different providers, as the government seeks to protect the population from the delta variant.

In September, the population under the age of 55 that’s already been inoculated with the China-made vaccine will receive a booster from Pfizer-BioNTech. Meanwhile, children as young as three will be eligible for their first vaccines once health authorities have granted approval, Health Minister Enrique Paris said without specifying dates.

Chile is reinforcing a vaccination campaign that’s delivered two doses to about 65% of its population. Virus case counts and hospitalizations have plunged since early June, allowing for the roll-back in restrictions. Still, recent studies show the Sinovac shot loses some efficacy over time, and officials are concerned about the delta variant that’s caused major outbreaks from the U.S. to Asia.

This week, Sinovac announced plans to open a vaccine plant in Chile that will also serve other countries in Latin America.