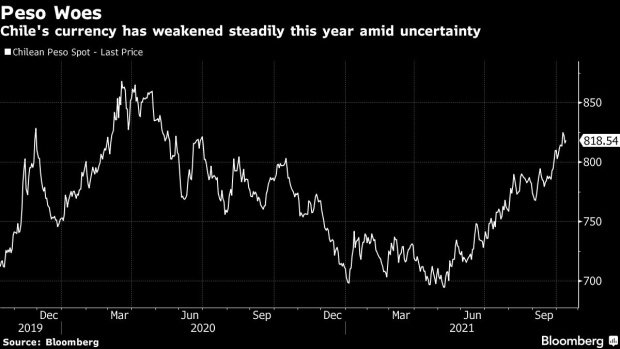 (Bloomberg) -- There’s just no saving the beleaguered Chilean peso at the moment.

The currency fell Thursday even after the central bank delivered the biggest interest rate hike in 20 years and ended a dollar purchase program, while the price of copper, the country’s top export, soared more than 2% today. The peso slid as much as 0.75%, the worst performance among 24 leading emerging-market currencies tracked by Bloomberg after the Turkish lira.

The peso has plunged more than any other emerging market currency over the past six months as political tensions mount before November’s presidential election. A former student protest leader is ahead in polls, while a market-friendly centrist is sliding. The opposition started an impeachment process against President Sebastian Pinera yesterday, further clouding the outlook. At the same time, investors are fretting over a proposal to drain more money from pension funds that are the bedrock of local capital markets.

“Idiosyncratic factors have weighed down the currency,” said Juan Prada, a strategist at Barclays Capital Inc. in New York, pointing to the pension withdrawals and concern over upcoming elections.

Policy makers led by Mario Marcel on Wednesday raised borrowing costs by 1.25 percentage points, more than expected by most economists, and halted a program to boost international reserves. In an accompanying statement, they wrote that rates would need to reach neutral levels sooner than expected to tame inflation.

“The Chilean central bank’s decision on Wednesday to stop buying U.S. dollars should provide some relief for the peso. A bigger-than-expected rate hike and forward guidance implying additional increases and a faster tightening cycle should also lend some support. High political uncertainty remains a drag.”

“This was a surprising and aggressive rate decision that incorporates inflation expectations,” said Sebastian Diaz, economist at Pacifico Research in Santiago. “They are going to continue raising rates.”

Worsening inflation prospects, together with political uncertainty and early retirement withdrawals, are weighing on local financial markets, policy makers wrote. The currency is down over 14% in the past six months, while peso-denominated bonds have sunk more than 18% this year in dollar terms, according to Bloomberg indexes, the most in emerging markets.

There are signs that Chileans are adding to the pressure on the currency, as the amount of dollars held in local checking accounts has soared by over $4 billion since the start of 2020.

“The dollarization of many Chileans is accelerating, in pure Latin American style,” Jorge Selaive, chief economist at Scotiabank Chile, wrote on Twitter.

Going forward, there are no signs that political tensions will abate any time soon. Opposition legislators are moving to impeach President Pinera following revelations in the Pandora papers, while the Senate may vote on the pension withdrawals as soon as this month.