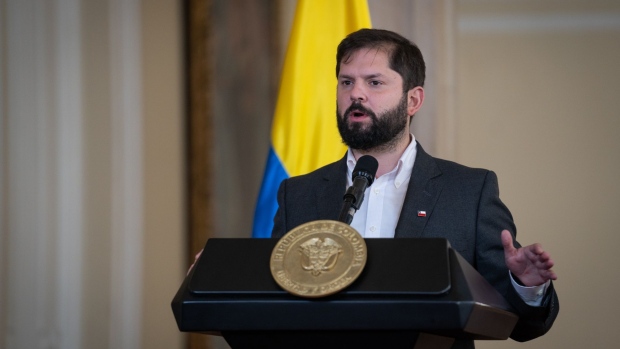 Gabriel Boric, Chile's president, speaks during a joint press conference with Gustavo Petro, Colombia's president, at the Presidential Palace in Bogota, Colombia, on Monday, Aug. 8, 2022. Petro began his four year term Monday by holding meetings with Chile's Boric and with representatives of Mexico, Cuba and the United States. , Bloomberg

Next year’s budget will focus on promoting economic growth, public safety and social security, Boric said in a televised speech. He said that the increase will not fuel consumer prices but didn’t specify a target for next year’s fiscal deficit.

Boric is rolling out his first budget proposal after coming to office in March as annual inflation runs at a three-decade high and his support slumps. The former student protest leader won last year’s election on pledges to bolster the government’s role in providing basic services and attack inequality. At the same time, he has vowed to keep debt levels in check and assure that spending measures are sustainable.

This year’s budget, presented by the prior Administration of Sebastian Pinera, reduced spending by 24% this year as extraordinary stimulus measures to counter the pandemic were phased out.

“The budget that we will present tomorrow will have a countercyclical effect,” Boric said. “In a context of lower tax revenues due to the adjustment of the economy, we will increase spending, ensuring the continuity of good public policies and mobilizing a significant amount of resources for economic recovery.”

The budget proposal has a maximum of 60 days to be debated and voted by both houses of Chile’s congress after it’s formally submitted to the legislature.

The central bank expects the economy to contract between 0.5% and 1.5% next year as domestic demand and total investments drop. The bank also expects annual to slow to 3.3% by December 2023 from 12% at the end of 2022. Economists surveyed by Bloomberg see inflation of 6.8% for the end of next year.

Other key points of the budget, according to a document from the Finance Ministry: