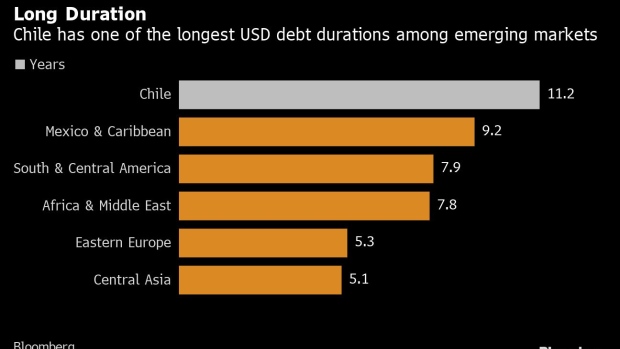 (Bloomberg) -- At first blush, Chile’s bonds look like a mess.

Its overseas government and corporate notes have been the worst performers this year among investment-grade emerging markets. The 16% loss is almost three times the drop for similarly rated Kuwait, and exceeds losses for other ratings peers including Israel, China and Saudi Arabia.

But the wipeout isn’t so much a signal of investors’ skepticism toward Chile as it is a reflection of how highly regarded the country has been among bondholders. Its sterling reputation, earned over decades of timely payments and tight fiscal policy, allowed the country to issue longer-term debt at lower interest rates than most of its peers, as long as 50 years at just 3.25% in one case.

Now, as global interest rates surge along with inflation, investors are selling off long-term debt no matter the issuer. Across all maturies, more than $7.3 trillion of fixed-income market value has evaporated in 2022. The flight away from duration -- a measure of how long it takes before buyers get their principal back -- has punished anyone holding those 30-, 40- or 50-year Chilean notes.

While the losses from long-term bonds have been painful for creditors, there’s no reason to hold it against Chilean finance officials. They just catered to investor appetite for duration as they locked in the borrowing costs that will save the government millions of dollars in interest payments over the next decades.

“Issuing at long tenors has proved to be very effective,” said Kieran Curtis, the London-based director of investment at Abrdn Plc in London. “The debt management office did a good job with the issuance.”

The average duration on Chile’s bonds is 11.2 years, the highest in emerging markets and more than twice as long as what’s typical for issuers from developing nations in Europe. As a result, Chile doesn’t have to roll over as much debt as interest rates surge.

To be sure, this year’s selloff in Chilean bonds has been exacerbated by concerns about the country’s political outlook. A rewrite of the constitution may guarantee more social services and boost fiscal spending, and President Gabriel Boric also has plans that could put pressure on the budget.

“We’re neutral on Chile because of the political cycle, the new constitution and the risk of fiscal slippage going forward -- and the high duration is a problem,” said Guillaume Tresca, a senior emerging-market strategist at Generali Investments in Paris.

That said, spreads for Chilean bonds have been holding up essentially in line with other investment-grade issuers, which shows that the underperformance is tied to duration more than anything specific to Chile, according to Andres Perez, chief economist at Itau Corpbanca.

Perez, who helped oversee the country’s long-bond strategy when he worked as head of international finance at the Finance Ministry, said that extending durations and creating benchmarks at key maturities was to facilitate the access of local issuers in capital markets.

Investors in Chile who stayed away from the country’s longest-term bonds have fared better, said William Snead, a strategist at Banco Bilbao Vizcaya Argentaria SA in New York.

“For passive investors, tracking specific indexes, they might be feeling a bit more pain on the total return side derived from the higher duration of Chilean bonds,” Snead said. Chile’s government was “smart to come to the market and with good timing.”