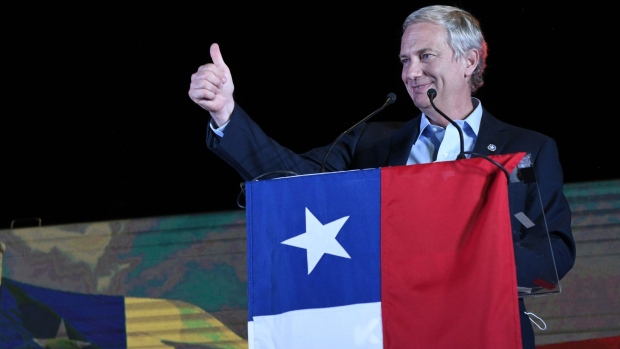 Jose Antonio Kast, presidential candidate of the Republican party, speaks during an election night rally in Santiago, Chile, on Sunday, Nov. 21, 2021. Conservative Chilean presidential candidate Kast and leftist rival Gabriel Boric will square off in a runoff next month, setting the stage for the most divisive election since the return of democracy in 1990. , Bloomberg

Key policy goals such as lowering taxes will be done “in accordance with reality,” Kast said in a press conference. Foreign investors must go back to seeing Chile as a responsible country with a promising future, he said.

Kast topped the first round of presidential elections on Sunday, and will face off against former student protest leader Gabriel Boric in a highly polarized runoff on Dec. 19. A trained lawyer and former lawmaker, Kast backs lower taxes, a smaller government and free enterprise. By contrast, Boric pledges higher levies, better public services and more equality.

On Thursday, Kast also said he is considering economic proposals from government coalition parties and that his program is “not set in stone.”

Both Kast and Boric are rushing to secure endorsements while also adding on to their teams. This week, Boric included former central bank President Roberto Zahler and professor Andrea Repetto among his economic advisers.