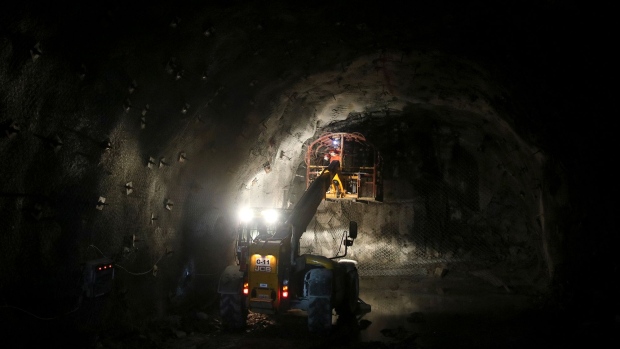 An employee stands on a lift inside the Codelco Metals Inc. Teniente copper mine near Rancagua, Chile, in 2018. , Photographer: Laura Millan Lombrana/Bloomberg

(Bloomberg) -- A proposal to suspend mining and forestry concessions that infringe on indigenous territories in Chile was approved in the first instance by an environmental committee as part of the drafting of a new constitution.

The motion is shaping as the first flash-point between a society looking to enshrine environmental and social issues in the magna carta and industries struggling to meet rising demand for the building blocks of a cleaner economy.

Members of the committee voted 13 in favor and four against on a plan to annul concessions granted without prior consent of indigenous groups, according to a document posted on the constitutional assembly’s website.

The proposal -- which still requires a final vote by the committee and approval by two thirds of the 155-member constitutional assembly -- would allow permits to be reinstated within two years with community consent. If the proposal makes its way into the constitution, it could trigger a technically difficult inventory of native territories.

Read More: Young and Green, They Are Rewriting Rules of Chile Copper Mining

There may be even greater implications for Chile’s booming forestry industry than for mining given much of the nation’s plantations are on land that Mapuche indigenous groups claim was acquired under shady circumstances during the dictatorship of Augusto Pinochet in the 1970s.

Deliberations on a charter to replace the one that dates back to the dictatorship have begun in earnest. Other proposals include setting time limits on concessions, with the copper industry pushing hard to retain the indefinite concession model, which it says is critical for long-term planning that underpins investments.

The document, which has to be ratified in a referendum, will help determine how much of the world’s biggest copper and lithium reserves will be tapped in the coming years as the world tries to wean itself off fossil fuels.