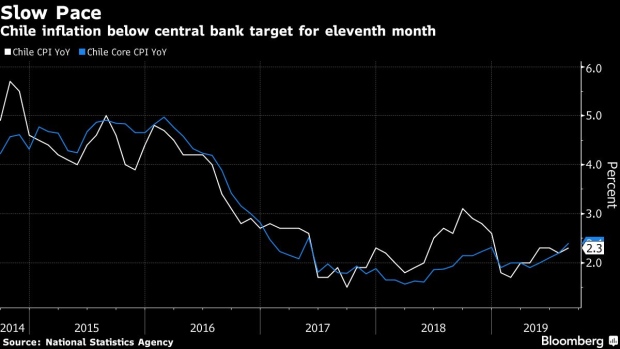 “We have had slower growth as a result of this trade war, but we are in the process of improving our chances of growth in the second half,” Chile’s Finance Minister Felipe Larrain told Bloomberg TV’s Francine Lacqua on Monday.

He cited major floods as depressing growth in the first half, and pointed to the likely passage of the Trans-Pacific Partnership deal through the Chilean Congress as a potential boost for the economy. He expects economic growth above 3% in the second half of this year, and expansion between 3% and 3.5% for 2020.

Chile’s central bank cut its benchmark interest rate to a nine-year low this month, and hinted on more reductions in a bid to fight slowing growth amid global trade tensions. The central bank simultaneously downgraded its 2019 growth forecast for the third time, and warned that inflation could miss its target again this year.

Chilean President Sebastian Pinera began his second term in 2017 with an agenda to boost growth and investment, but to date the government has struggled to pass pro-business reforms. Key tax and pension bills are being stalled while a labor-reform bill is capturing much of the attention.

To contact the reporter on this story: Yuko Takeo in Tokyo at ytakeo2@bloomberg.net

To contact the editors responsible for this story: Paul Gordon at pgordon6@bloomberg.net, Brian Swint, Raymond Colitt